The Signs At The Patriots Parade Are Absolutely Obliterating Roger Goodell, Here Are The Most Unforgiving Signs. 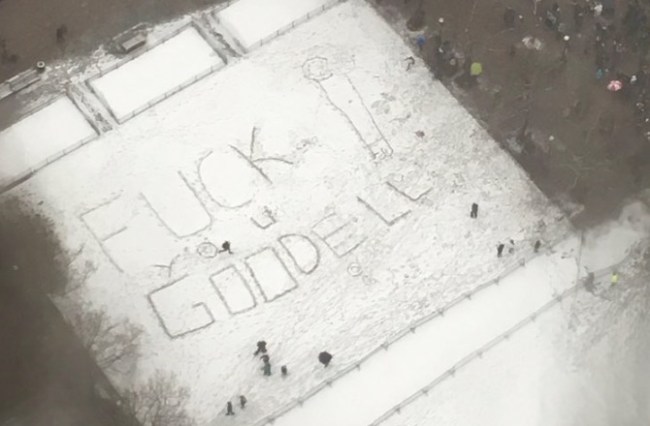 Every Boston household in April 2016 in barely understandable Boston accent: “Tommy’s going to rest up for four weeks and then go 15-1, win tha Supa Bowl, and stomp on Goodell’s nuts as he hands him his fifth Lomahhhhdi Trophy.”

Besides the ball-stomping part, this actually fucking happened. Brady went 15-1, posting insane regular season stats–throwing for 3,554 yards, 28 touchdowns, and just two interceptions and capping it off with arguably the most improbable comeback in sports history. With his fifth Super Bowl ring, fourth Super Bowl MVP and Super Bowl-record 466 passing yards, the Joe Montana era has no choice but to crown a new GOAT.

This Super Bowl victory for New England was as much as an accomplishment as it was a giant FUCK YOU to Roger Goodell, who used executive order to railroad the Patriots in an eight month, spite-induced witch hunt against Brady. Not one person in New England has forgiven Goodell, not even the police.

#BostonStrong: When they suspended TB12 for 4 games, they didn't just disrespect the greatest QB of all time, they insulted a region. pic.twitter.com/RBwnQN17nK

The Patriots parade is currently taking place in the streets of Boston and there are hundreds of signs shitting on the NFL commish. Here are a few of the good ones.

I think it's more of Goodell's funeral than the #patriotsparade today 😂🏆💍

The other side of this kid's banner was vulgar even for an adult's eyes. This side, a shot at Goodell. #PatriotsParade pic.twitter.com/AG08kBea6x

"Roger, Over and Out." I don't think that needs any explanation… #PatriotsParade pic.twitter.com/UHau3Sm5gU

The sign the Sports Hub will be handing out at the parade today. pic.twitter.com/qlStfgiIj0

Straight and to the point pic.twitter.com/bc0RVJLHKK