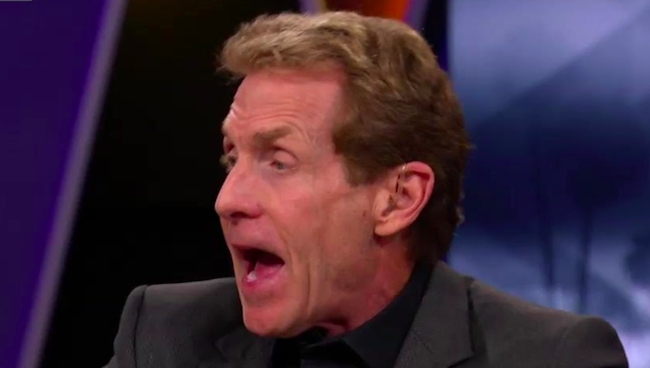 Last night, brackets were busted and tables were broken after the 13th-seeded University of Buffalo Bulls pulled off the biggest upset of this year’s NCAA Tournament so far after a more-than-decisive 21-point win over the Arizona Wildcats. If you work with anyone who still hasn’t figured out people care as much about their bracket as they do about their fantasy football team, you’re probably more than aware that plenty of sudden college basketball experts had them going deep into the tourney.

However, basically anyone can be forgiven for failing to predict a four-seed would be eliminated in the first round. However, you’d think that there are a few people out there who might have at least seen hints that this was coming even if they didn’t think it would actually happen— someone who, say, is paid tons of money for their opinions about sports.

Surely Bayless, being the expert that he is, could have seen a couple of cracks in the facade of the Arizona squad. Let’s see what he had to say before the game.

I'm picking Arizona to win it all as a 4 seed because of Deandre Ayton, who at 7-1 has NBA superstar potential. Plays so hard and smart for his age. Maybe I'm expecting too much too soon, but he's easily the best player in this tournament.

Thankfully, Twitter— as we all know— is a largely judgeless place where people are easily forgiven for their mistakes and everyone quickly moves on and forgets they even happened.

His mentions were quickly filled with basically every single GIF appropriate for such an occasion, and his tweet was forever memorialized by the account that’s easily the gold-standard when it comes to handing out Ls for ill-fated predictions.

In fairness, Ayton did manage to post a meaningless double-double in the loss, but if you think that’s going to stop people from roasting Skip Bayless, you obviously don’t know how fun it is to roast Skip Bayless.