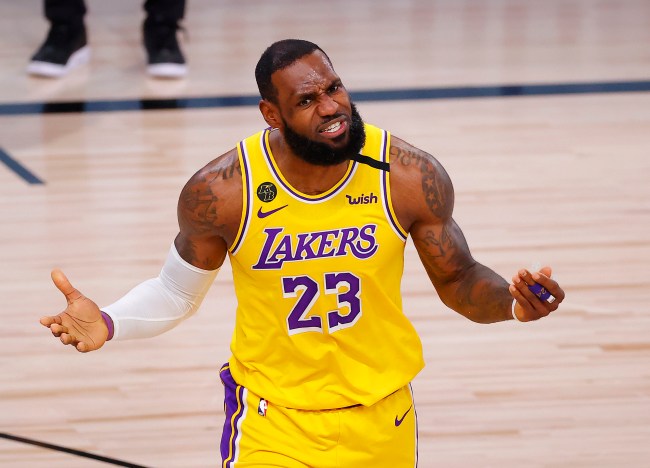 Resident troll Skip Bayless was at it again Wednesday morning on FS1’s Undisputed, doing what he seems to do best: Blast TF out of Los Angeles Lakers star LeBron James. Skip, who has literally made a living giving unpopular hot takes about pretty much everything, has long supported the idea that Michael Jordan is the GOAT — which is the consensus among sports fans. But Bayless has been blind to the fact that things change, and, should James win a fourth NBA title against the Miami Heat in this year’s NBA Finals, Bron could inch his way closer into the discussion.

While it’s no guarantee that James and his Lakers score a championship yet, being up 3-1 on Miami seems like a safe enough bet that it’s bound to happen. So what would a fourth ring mean to “The King’s” legacy? According to Skip Bayless, it would actually hurt it, with the TV personality actually wasting his breath to try and explain his reasoning.

How winning this ring will hurt LeBron’s GOAT case. Now on @undisputed

"Do you want to know the truth? This cakewalk of a Finals victory actually hurts LeBron's farfetched GOAT case." — @RealSkipBayless pic.twitter.com/8PUvA9i5Ik

Don’t get me wrong, the Miami Heat in the NBA Finals was a shock, which Skip pointed out with the whole 75-1 odds thing. But it’s long-been said that you can only play who’s on your schedule, and, for LeBron and the Lakers, Miami’s young and promising core presents a challenge — just not one big enough for Bayless to acknowledge. And, because the take was such nonsense, NBA fans on Twitter let the Undisputed host hear it, and completely ripped the idea that a fourth ring hurts James’ legacy.

Imagine hating someone this much pic.twitter.com/fCv8tvPAeI

So bron taking care of his business while his toughest competitions failed to do the same is an indictment on bron? 😂😂😂😂

It's time for Skip to retire.

If there’s one thing Skip Bayless is it’s consistent, as he’s routinely spending energy trying to prove that LeBron James isn’t as good as Michael Jordan — which is a debate that had no end. While I admire the persistence by the Undisputed host, it’s sort of arguing about what type of pizza is best. Can’t we just accept the fact that both James and MJ are great and each dominated their collective eras? I get that that’s not sexy, and Bayless literally gets paid to be a troll, but, man, this whole schtick of hating on James is getting old.

Imagine being Bayless and being so obsessed with hating on James that you have to find a reason, no matter how absurd, to try and offer a good point about why he’s not that great. Leave it to Skip to do just that, somehow arguing that winning a championship isn’t good enough validation anymore. Sheesh.