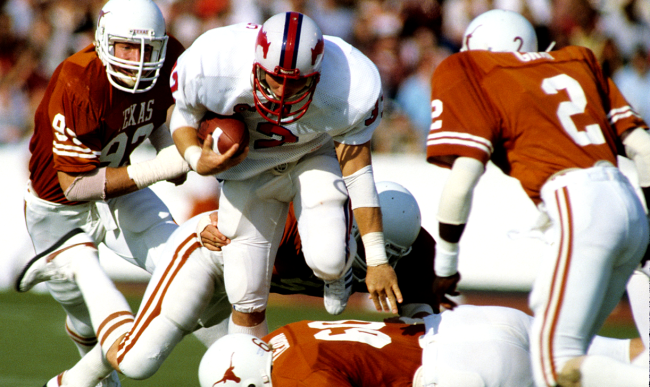 Last week, the Southern Methodist University football program hearkened back to the Mustangs’ glory days by referencing the early 1980s teams that got paid so much and so often that the NCAA handed down the death penalty.

In a bold new recruiting graphic, the SMU Mustangs football program including a photo of a gold Pontiac Trans Am that looked very reminiscent of the one former SMU star running back Eric Dickerson received from Texas A&M while they were recruiting him. (Yes, he kept the car. No, he did not ever play for the Aggies.)

“They knew I wanted this car, and A&M was pushing hard, talking to everybody in my family,” Dickerson told PFT Live in February. “They had me go down to [the dealership] right there off of I-10 and said, ‘Hey, I wanted to look at a car.’ I go down there with them and make a long story short, they come back like, ‘OK, here’s the keys.’ I’m like, ‘What?’ They’re like, ‘Just take the car.’ I’m like, ‘Cool, I get a new car?’

Throwback Thursday! Since everyone was talking about what my Grandma bought me, here ya go. #TBT pic.twitter.com/Bicz1XLTL0

It is one of college football’s classic pre-NIL (Name, Image and Likeness) stories showing the (illegal) lengths boosters and college football programs would go to in their efforts to sign the best high school players.

On Monday, just six days after SMU posted their awesome recruiting graphic, which included the tagline “All Roads Lead to Dallas,” the University of Texas Longhorns football program posted a VERY similar image to their social media channels. Texas’ very different tagline was “Hitting the Road.”

The similarity to SMU football’s graphic was not lost on many college football fans, including Mustangs’ head coach Rhett Lashlee who took a not-at-all veiled swipe at Texas for copying his program.

Hmmmmm where have I seen this before? Oh yeah, that’s right. https://t.co/MvpKT8Cv0d

When you can’t beat Kansas, just gotta revert to stealing other peoples’ content instead.

Y’all really stole the SMU poster? Got Kansas as an away game this year. I’d start prepping now

Imitation is the highest form of flattery 😎

Will the hooker or her monkey that bit a trick or treater be along for the ride?