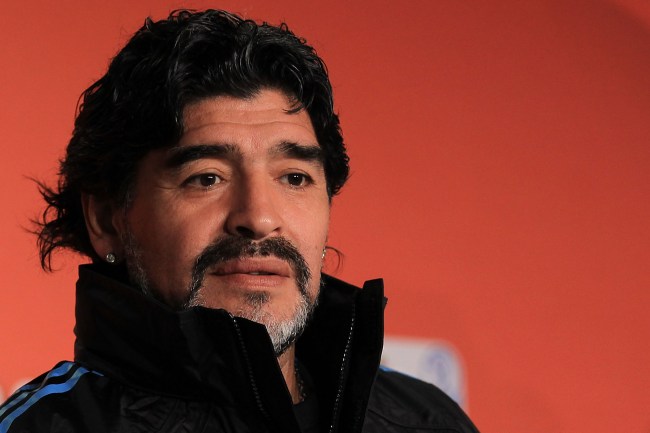 Argentine soccer legend Diego Maradona has passed away at 60-years-old according to several reports from South America.

According to Argentine newspapers LA Nacion and El Clarin, Maradona suffered a heart attack at his home weeks after having brain surgery.

Diego Maradona has died at the age of 60 after suffering a cardiac arrest, according to reports in his native Argentina.

The football legend had a heart attack at his home just two weeks after leaving hospital where he underwent surgery on a blot clot in his brain.

The iconic former Argentinian footballer was driven away from the private Olivos Clinic just before 6pm on Wednesday as hundreds of fans of photographers tried to get a glimpse of him.

Maradona, regarded as one of the greatest footballers of all time, helped Argentina win the World Cup in 1986, the pinnacle of an illustrious career.

Diego Maradona has died after suffering a cardiac arrest, according to reports in his native Argentina. The football legend had a heart attack at his home just two weeks after leaving hospital. ~ Daily Mail pic.twitter.com/euxi0JRqK8

Tributes to Maradona have been pouring in immediately after news of his death hit social media.

Diego Maradona has passed away at 60 years old at his home in Argentina.

He never failed to entertain and always brought a smile to everyone’s face 🙏pic.twitter.com/Nz4UbXpThL

Farewell to one of the greats, Maradona. RIP Legend. pic.twitter.com/s2oxm2h6nP

Maradona was so good that the defensive game plan to stop him was basically this. pic.twitter.com/2sY5oVzGjv

My heart breaks… it was way way way too soon. He had just turned 60.

Brilliant magician on the field, a socialist with a Che Guevara love, and a challenger of football’s corrupt overseers.

The first goal in ‘86 still hurts; but the second was one of the best I’ve ever seen. Rest in peace Diego Maradona. A troubled man; but with a ball at his feet, an absolute genius. pic.twitter.com/YEhvwSOtD4