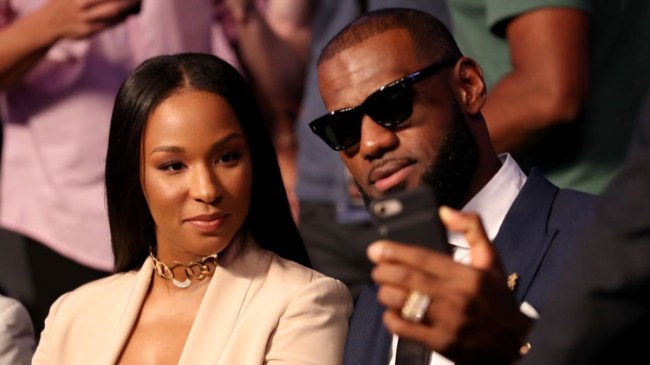 LeBron James and the Los Angeles Lakers are currently experiencing a brutal start to the 2022-23 NBA season. The Lakers are 0-3, Russell Westbrook is still awful, and opposing announce teams are dunking on them left and right.

But it’s not all bad for King James.

After all, he’s got a beautiful family, including two high school-aged sons who already have college scholarship offers. But the latest bit of news surrounding James might just throw that into turmoil as well.

LeBron James married his high school sweetheart Savannah Brinson in 2013. The couple has three children together and are often seen out with one another at a number of events.

However, a recent claim by former “Call Her Daddy” podcast host Sofia Franklyn states that James not only cheats on Brinson, but he does so often. The conversation began with a discussion about Maroon 5 lead singer Adam Levine’s alleged affair, but quickly pivoted to James.

If ur gonna cheat.. at least have some respect and LOWER UR FUCKING VOICE ADAM #lebronjames #leonardodicaprio #cheater #adamlevine

“Don’t be dumb,” she starts. “You are famous, Adam, you know how f-ng famous you are. You can be a little sly about it. Leonardo Dicaprio, I know for a fact, I mean, I’ve never been invited but my friends have. He goes out, and his bodyguards or whatever go up to the girls, ask them if they want to go back to his house or wherever. They sign an NDA. LeBron James, same shit. Should I be outing all these people?”

Then someone off camera asks what James did. To which Franklyn responds goes into detail.

Someone would say it’s good to be the king. Others will wonder how things are going to go down when James’ wife gets wind of the allegations.