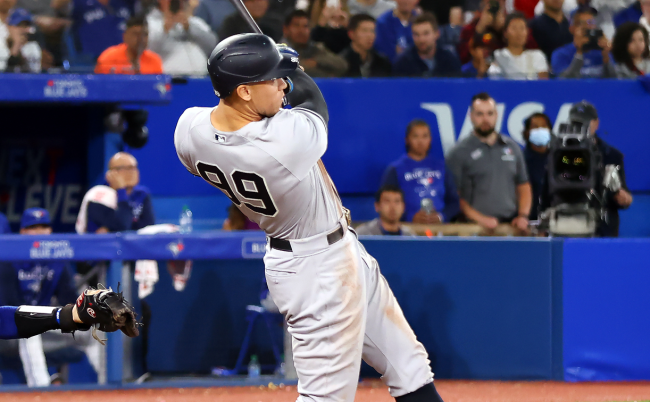 Anytime a player achieves some historical mark in baseball, the ball the player hit to reach that achievement is automatically worth a lot of money to collectors.

New York Yankees slugger Aaron Judge reach one of those historical marks Tuesday night when he finally smashed his 62nd home run of the season, breaking the American League mark set in 1961 by Roger Maris.

The ball ended up in the hands of a fan named Cory Youmans, the husband of Sports Illustrated’s Dallas Cowboys and Mavericks reporter Bri Amaranthus.

THIS IS MY HUSBAND. https://t.co/GNIuP7phnA

Youmans hasn’t decided yet what he’s going to do with the ball, but it has been estimated to be worth around $2 million if he decides to sell it.

Judge’s record tying 61st home run ball was returned to the Yankees star after it was corralled by Blue Jays bullpen coach Matt Buschmann (much to the dismay of his wife).

The one fan who actually had a shot at catching that particular ball, Kyle Mulligan, failed miserably, but did get a consolation prize of an appearance on Jimmy Kimmel Live to talk about it.

“I would have put these kids of mine through college,” Mulligan said, adding. “They’ll be alright still, but that would have helped. Six figures, right?”

Meanwhile, others, who had zero chance of getting either one of Aaron Judge’s historic home run balls, are still trying to make some money with some very unusual attempts to cash in on the home run chase.

That’s right. Someone who was at Toronto’s Rogers Centre during the game Judge hit his 61st homer is trying to sell a bag of air from the stadium.

They don’t specify if the air in the bag was captured at the exact moment when Judge hit his 61st home run, but really, does it matter?

A whole bunch of fans had a lot of fun laughing at the mere idea of such a thing.

It does make one wonder…

For what it’s worth, Aaron Judge seems pretty chill about the whole ball thing.

“I don’t know where it’s at, so we’ll see what happens with that. It’d be great to get it back, but that’s a souvenir for a fan, so, you know, they made a great catch out there and they’ve got every right to it,” Judge told the media after the game Tuesday night.