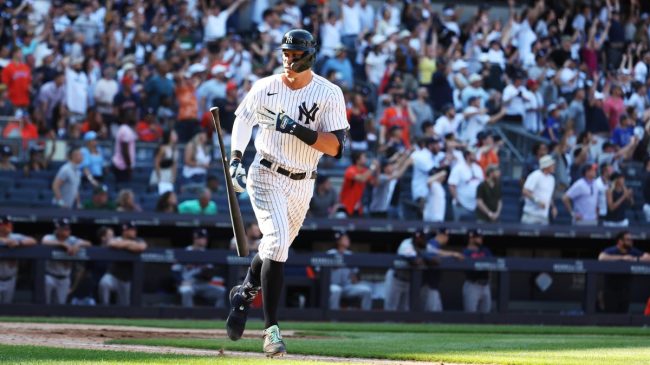 Aaron Judge has done it! On Tuesday, he became the American League record holder for home runs in a season.

Judge’s 62nd home run is reason to celebrate for Major League Baseball fans everywhere. It also gives Roger Maris Jr., whose father was the previous record holder, a chance to return back home to his family after following the Yankees around North America for the last two weeks.

But baseball fans aren’t the only ones rejoicing. Football viewers around the nation are ecstatic that they’ll no longer have to watch in-game split screens of Judge’s at-bats.

We’ve seen it affect broadcasts in every sport, but college football fans have certainly gotten it the worst. There’s nothing more irritating than tuning into your favorite school’s big game only to be interrupted by an Aaron Judge at-bat at the worst possible moment.

That’s what viewers have had to deal with over the last two to three weeks of the season.

But split screens will be no more as the record has finally been topped. Of course, Judge waited until the second to last game of the year, but I digress.

College football fans now that they don't have to watch any more Aaron Judge at bats pic.twitter.com/8D80DP7xvs

Somehow, the record-breaking shot didn’t come during the airing of a football game. Instead, fans just had to watch Judge walk to first on every other occasion.

if Aaron Judge hits his 62nd home run but it wasn't during a college football game did it really happen??

We are finally FREE!!

Thank you Aaron Judge for finally giving us our college football Saturdays back. WE ARE FREE!

It’s finally over, football fans. The season is now ours.