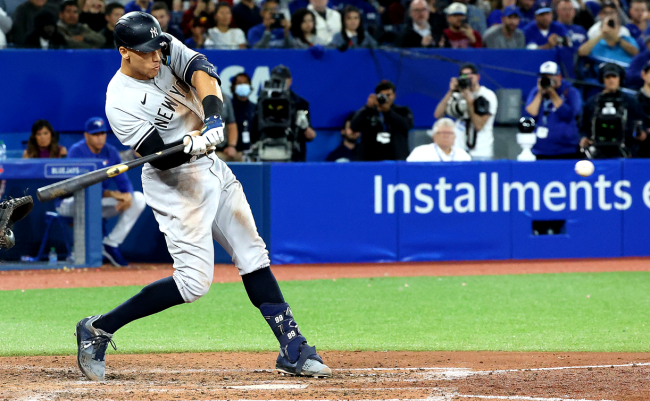 Prior to Aaron Judge hitting his American League (Major League?) record tying 61st home run in Toronto Wednesday night, baseball fans had all sorts of unusual ideas of what that ball would be worth.

Everything from the GPS coordinates of Chris Jericho’s wife’s cellphone on Jan. 6th to the Balto Statue in New York were mentioned, but really, most fans would have gladly traded Aaron Judge’s 61st home run ball for a big ole pile of cash.

Unfortunately for all of those fans, and Blue Jays bullpen coach Matt Buschmann’s wife, the one guy who had a legitimate shot at actually catching the ball completely and totally whiffed.

Naturally, it didn’t take too long for that fan to be identified and his name Kyle Mulligan.

On Thursday, Mulligan appeared on Jimmy Kimmel Live to talk about his national fail and his reaction to missing out on, as Kimmel called it, “a flying Lotto ticket.”

“How are you feeling today, Kyle?” Kimmel asked him to begin the interview.

“Terrible,” he replied with a grin.

“From my perspective, I went to that game thinking I was going to catch that ball,” Mulligan told Kimmel. “I told everyone I know I’m going to come home with that ball. I knew it was coming. I was ready for it. I went for it. And I think Frankie Lasagna – the guy that everybody thinks I am – bumped my glove a little and I missed it by like two inches.”

Jimmy then asked him what he would have done if he had caught the home run ball.

“I would have put these kids of mine through college,” Mulligan said, adding. “They’ll be alright still, but that would have helped. Six figures, right?”

As a consolation prize, Kimmel decided to give Mulligan and his wife a free trip to New York City so they can … see the ball drop. Ba-dum-dum!