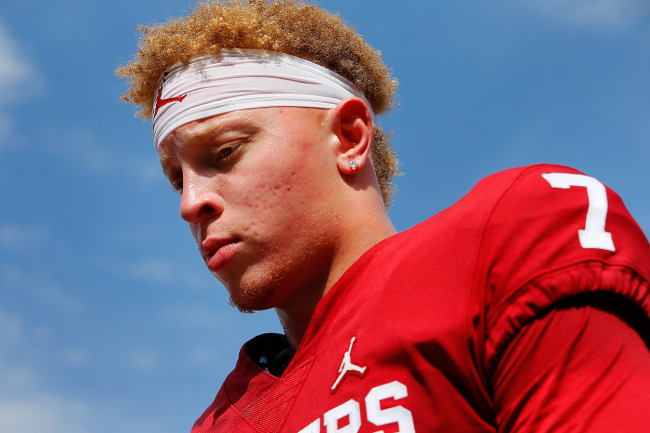 Spencer Rattler first gained national attention in high school as a five-star recruit on the Netflix show ‘QB1: Beyond The Lights.’ The show, much like NFL Hard Knocks, or Last Chance U, followed around the top quarterback prospects in the nation on their journey to the college level.

In the show, questions were raised about Rattler’s attitude. One scene in particular left a lasting impression on his critics.

Thus, throughout his career, wherever Rattler goes, character concerns follow. That was the case once again in October when Caleb Williams took over as the starting quarterback at Oklahoma against Texas.

Since then, Rattler showed great maturity in the backup role and transferred to South Carolina. After he arrived in Columbia early last month, the coaching staff has been impressed with his leadership.

Rattler spoke with the media for the first time on Wednesday.

While discussing a myriad of topics, from his new outlook on football and feeling “refreshed” to his new teammates, he was also asked about his character. When asked what he would say to those who said negative things about him, Rattler was quick to put it in the past.

“A lot of people seem to forget it is a reality TV show. At that time, I was 16-17 years old having fun with my buddies in high school. We all were our authentic self in high school. I think people around sports see that competition side come out of you in different ways. My character is definitely not portrayed well in that show. That is just how it was made. I am five or six years grown from that and hopefully I have changed a little bit. I definitely have. I am a very competitive guy and also a very caring person. That is what I would have to say to those folks.”

Rattler also spoke about his leadership role with the Gamecocks and says that the crowded quarterback room is like a family.

“You’ve got to come in a confident player, confident quarterback, but also with my experience throughout college, I’m definitely a leader in the QB room. I want to show these guys a work ethic, the experience I’ve been through and just everything I know about college football as a whole, but also with that, I’ve learned a lot from those guys as well.

“Luke Doty, he’s been a great help to me. We feed off each other. We compete with each other. He’s in my workout group. We’re always throwing. All these guys are great guys. Braden Davis, trying to help him out, he’s looking great. It’s just a family in the QB room. That’s one of the biggest things that you need on a football team, for your quarterbacks to be tight, because they’re the leaders on the team. If they’re not tight, the team is not going to go well.”

In addition, Rattler spoke about the challenge of earning respect as a transfer.

“I think, in the transfer world now, a lot of guys transfer to new schools and have to try to earn that respect. Me coming in a month ago, a little later than the other guys, I feel like, so far, I’ve done a great job of showing them my work ethic every day during workouts, putting a throwing session together with the receivers, just chopping it up with the guys, getting close with the o-line, doing some things with them. I feel like earning that respect is just from working. Not a lot of talk, just a lot of work. That leadership will come around. I feel like, so far, it’s been pretty smooth.”

When South Carolina opens the 2022 season against Georgia State on September 3rd, Rattler is expected to be the starter. He will look to change the narrative that has followed him since high school, rediscover his groove and lead the Gamecocks to new heights, all the while positioning himself for the NFL Draft in 2023.