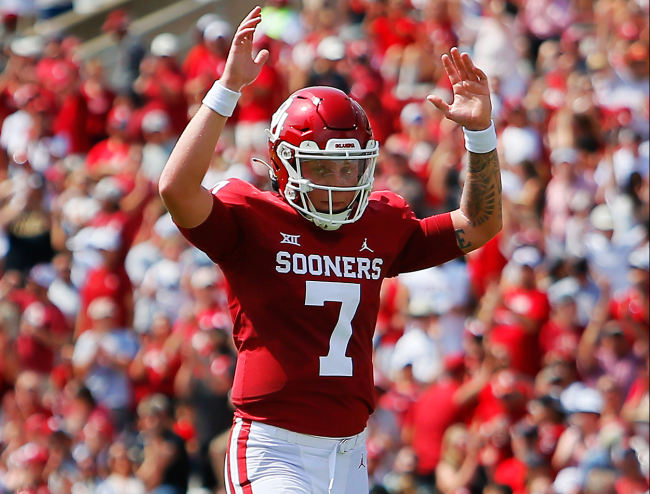 Spencer Rattler’s college career hasn’t quite gone as he had planned. Now he is trying to change the narrative.

Rattler, a former five-star quarterback recruit burst onto the scene in his redshirt freshman year at Oklahoma and immediately became Heisman Trophy candidate. However, after some early-season struggles, the 21-year-old was benched in favor of Caleb Williams against Texas.

From that point forward, Williams was the starter. As a result, immediately after the regular season, Rattler entered the transfer portal.

He has since committed to South Carolina, arrived on campus earlier this month and is already putting in the work to get bigger and faster. In addition to his on-field play, Rattler  has impressed Gamecocks coaches with his leadership.

Out of high school, Rattler had questions about his attitude.

Those concerns again came to the forefront after Williams took over for the Sooners. Rattler’s reaction to his backup’s success was not particularly positive, to say the least.

He also chose not to celebrate with his team after being benched in the rivalry win. In addition, in the week following his benching, Rattler stepped away from the team instead of showing up to compete for his job back.

In the end, the Arizona-native showed great maturity in the backup role amid the character concerns, but the stigma doesn’t just disappear.

Now it sounds like Rattler is working to change how he is viewed at South Carolina.

According to former Gamecocks and NFL fullback Patrick DiMarco, who joined Shane Beamer’s staff at his alma mater in 2020, Rattler is turning heads with both his athleticism and his leadership. He recently spoke about the first-year SEC quarterback on the JB and Goldwater Show and had nothing but positive things to say.

“I tell you what, he’s going to be a problem for other teams in the SEC to deal with. He’s athletic as can be, (but) the first thing that jumps out (are) just his leadership skills.

It’s with players like Josh Vann, Jaheim Bell and MarShawn Lloyd, and how they’re already, in the second day that he was here, they’re already starting to create these relationships and generate that trust. And not only that, but it was also his second or third day and he’s already demanding more from these guys. I have the ultimate respect for that. If you’re a leader, you’re a leader. You’re not a leader sometimes. It doesn’t matter your situation.”

DiMarco went on to discuss how Rattler compares to his attitude during his playing days.

“(Rattler’s) kind of taken that same approach. I think he’s been encouraged to do that as well, because he knows what winning looks like and he’s been given, just from playing the quarterback position and the talent level, all the blessings that God has given him, he has a platform to go out there and guys are just going to genuinely follow him. I’m really excited about him. He’s going to be fun to watch and a lot of fun to coach.”

South Carolina is currently in the middle of offseason workouts, but it sounds like Rattler is already making an immediate impact. Spring practices don’t start for another month, but when they do, it will officially be Rattler’s team.