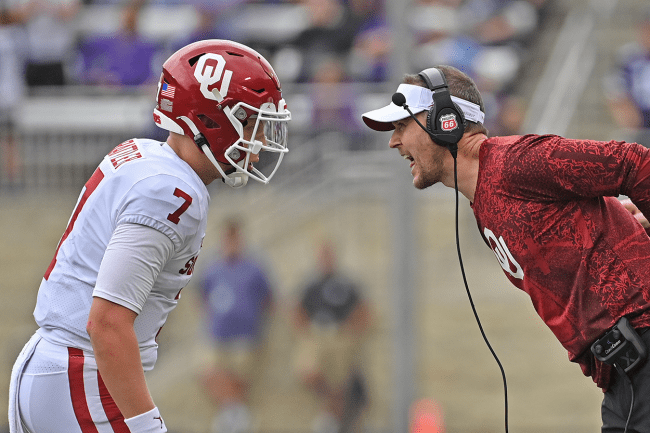 After arriving at South Carolina at the beginning of February, quarterback Spencer Rattler spoke with the media for the first time on Wednesday. During his press conference, the 21-year-old discussed his new outlook with his new team and threw shade at his old team in the process.

Rattler, who signed with Oklahoma in the Class of 2019 as the No. 1 overall quarterback in his cycle, burst onto the scene as a sophomore. After leading the Sooners to a dominant Sugar Bowl win in 2020, he was considered a Heisman Trophy favorite in 2021.

But things did not go according to plan.

After some early struggles in the first six games of the season, head coach Lincoln Riley turned to the bench. Five-star freshman Caleb Williams took over at quarterback against Texas and led the largest comeback in Red River Shootout history. From that point on, Williams was the guy in Norman.

As a result, Rattler hit the transfer portal at the end of the season. He ultimately ended up committing to South Carolina.

Since arriving in Columbia, Rattler has already changed the narrative about his attitude. He also addressed the haters in a very lit hype video and is putting in that work to get stronger and faster before spring practice.

Rattler addressed the media as a Gamecock for the first time on Wednesday.

During his media session, the Arizona-native spoke about his new lease on life. He feels refreshed, and he feels like some of the pressure has been taken off of his shoulders just a little bit.

South Carolina QB Spencer Rattler on choosing to play for the Gamecocks:

"I feel totally just refreshed. To be at a new university, a great university like this… I'm very comfortable here."@GamecockFB @wachfox pic.twitter.com/blHcQRsHNm

In addition, Rattler spoke about what he has learned in his short time at South Carolina. While doing so, he took an indirect shot at Oklahoma, saying that he has learned more in a month with the Gamecocks than he did in three years with the Sooners.

“The system definitely levels a pro-style system. I am learning a lot of new things every day. Terminology and verbiage that I didn’t know coming in. Coach Satterfield and Coach Coleman have done a great job with me so far. I have learned probably more in a month than I have in my college career. With these pro-style systems and the film we are watching, I think it elevates everybody’s games on the team. Mentally and physically on the field.”

He also spoke about how what happened at Oklahoma and sounded surprised by everything that played out with Caleb Williams and the QB1 role.

“My second year, I had a great year and lost only two games. Last year, things went how they went. I couldn’t control it, I feel like as a player I was doing fine enough. We were undefeated at the time. I guess it wasn’t enough. I can’t control that.”

Even if Rattler may have had a chance to start for the Sooners in 2022 once the dust settled, he said that his time with the program had simply run its course.

In terms of coaching staffs, Rattler made it very clear that he loves what Shane Beamer is doing at South Carolina. While doing so, he indirectly took a shot at Lincoln Riley by praising Beamer for doing things that Riley perhaps did not.

“I think Beamer just has a great sense of awareness for what his players want and what they need. He’s a players-first coach. Everything in the facility is based around the players. What we feel is comfortable. What we feel is going to be beneficial. Just hearing that, that we all have input, that’s something that was a big decision, factor for me coming here, knowing I walk into a building every day where guys have input in what’s going on. I think that’s a big-time thing. A lot of other programs don’t have it. Coach Beamer is leading this place in the right direction and I know he is going to keep doing a great job.”

Now, to his credit, Rattler also spoke of what he learned during his time in Norman and did not have any ill words. But he also didn’t have any notable praise.

“I learned that I can accomplish a lot of great things with great guys around me. I had a great team at Oklahoma for my three years there. I learned a lot about my leadership skills, I feel like I improved in that area. I learned I can fight the adversity that is thrown my way. God has given me the talent to do my thing on the field and help the team I am on. Happy that I landed on my feet in Columbia, South Carolina and I can’t wait to get this ball rolling.”

It sounds like Rattler has a completely new outlook on the game now that he is at South Carolina. The only question is whether it will translate to his on-field play.