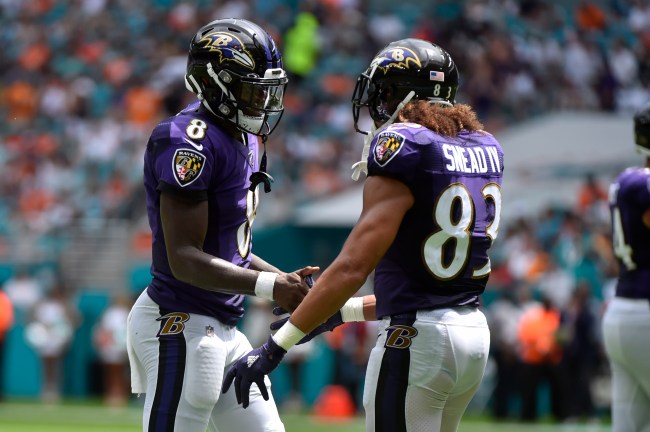 Winning money while sports gambling is never easy, but, damn it, we’ll all still try to make that coin. Sure, there are some people who are actually professionals at it — like former Jeopardy champ James Holzhauer — but, for most of us, walking away with a bunch of money for placing a bet on a sporting event usually doesn’t happen very often.

While most of us don’t win that kind of money regularly, one extremely lucky sports gambler is laughing all the way to the bank this morning thanks to a unique bet he or she placed on the Baltimore Ravens—Miami Dolphins game yesterday, which ended with an embarrassing final score of 59-10, Ravens.

According to Darren Rovell of The Action Network, a sports gambler dropped $30,000 on the Ravens to win at PointsBet, using a unique product called “Points Betting.” So how does Points Betting work exactly? Well, once the spread is covered, a better makes 1x the wager per point away from the spread; with the max win/loss for the wager on the Ravens-Dolphins game set at $600,000. Therefore, once the Ravens were ahead by 26 or more, the sports gambler would win $600,000. On the flip side, had Baltimore lost by 26 or more, the risky bet would have cost the gambler $600,000 — but, c’mon, the Dolphins suck, so that wasn’t going to happen.

Heading into the game, the Ravens were expected to cover the 7-point spread, but, damn, this type of bet really made this particular person filthy rich. Is this the type of sports gambling you’ll start using? Maybe so, because, if you’re lucky, it can reap some serious returns.

With Dolphins players reportedly already complaining to their agents to get them out of Miami — and rumors that the team is tanking — it’s basically the world’s safest bet to go against the Dolphins this season. And with the Patriots coming to town next weekend, dropping a couple thousand on the Pats by using Points Betting might be the way to go; because that could be an even nastier blowout than the one the Dolphins just experienced against the Ravens.