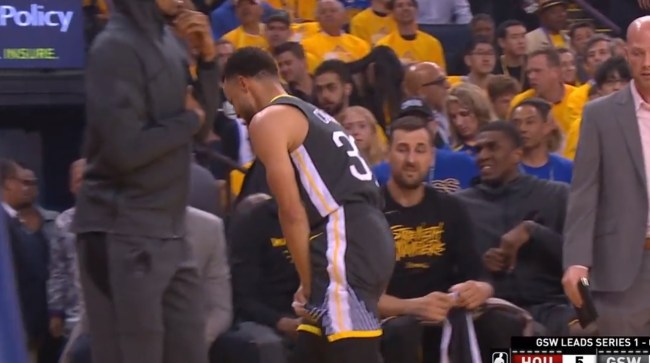 Steph Curry and his Golden State Warriors are the one team in the NBA who are probably looking forward to the offseason the most. After a five-year stretch that saw them go to the NBA Finals in each of those seasons — winning three titles — this past year presented the most difficult situations, with injuries crippling the team, talk about upcoming free agency for Kevin Durant and Klay Thompson and, ultimately, a Finals loss to the Toronto Raptors.

While the Warriors missed their shot at a three-peat with this year’s loss to the Raptors — and nobody knows for sure about what the future might hold for the team — Steph Curry and his teammates seem to be decompressing from the wild ride of another season. And, just because the Warriors didn’t win another championship, that didn’t mean they couldn’t celebrate in their own way.

That’s what seemed to happen immediately following the Game 6 loss in the NBA Finals a couple weeks ago, with Steph Curry detailing how he hosted a unique celebration at his house with some teammates to unwind and pay tribute to the wild journey of the past season. Here’s what the two-time league MVP had to say about the get together in an interview with Complex.

“This year was 10 times harder, physically and emotionally for sure. All the tough blows we were dealt on the way with injuries, you got three guys getting pretty significant injuries throughout the course of the playoff series, they were important guys and I would answer that question by saying I’m even more proud of how we handled it and how we fought to the end this year.”

“I mean, the sting is pretty much done by now, but I’ll be thinking about it until we start playing again. That’s part of the nature. You kind of go back and revisit what’s the best option for this game and what you could’ve done differently.”

“Even the night after we lost Game 6, we had the entire team at the house and we were drinking some wine and having some fun, talking about the crazy year that we had and it was nothing like somber or down about any of it. It was more like a celebration of just how special this journey has been and knowing that it’s not over yet so I think in turn having people that support you, having your family, and you getting to share them it definitely helps keep things into perspective and not make it more tough to lose than it already is.”

Sure, the NBA Finals didn’t go as everyone thought it would — which seemed to have Golden State winning its fourth title in five years. But, even in a season that ended with a heartbreaking and bad luck loss due to injuries, Steph Curry and his teammates still found a reason to at least look back and celebrate. It might seem a bit little league-esque, where there’s a post-season party to hand out trophies and stuff, but it’s still pretty awesome.

Whether Curry and his teammates realize this could be the end of their championship window because of the upcoming changes that could occur, or just a way to celebrate a season by drinking some wine and reminiscing together, it’s something that shows how quickly they got over the loss. That’s what the heart of a champion’s all about.