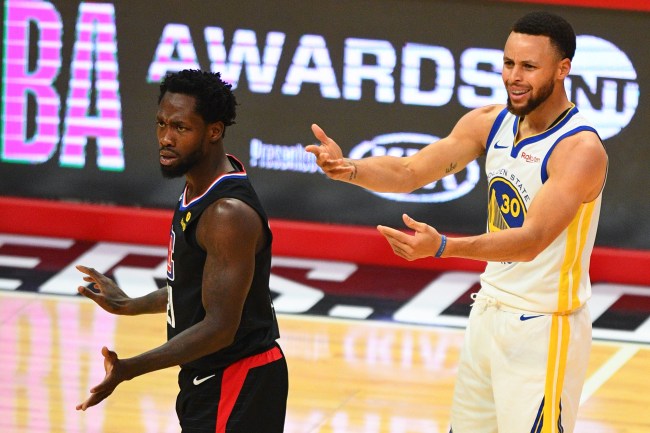 The rabbit finally has the gun.

Patrick Beverley’s seven-year NBA career has ultimately been at the mercy of the Golden State Warriors. The Warriors bounced the Rockets from the playoffs in back-to-back seasons during his tenure in Houston and his luck didn’t change when he signed to the Clippers, losing in the first round of the playoffs last season.

Now, armed with Kawhi Leonard, Paul George, and 141-122 opening night win over Golden State, the biggest agitator in the game has a new lease on life.

During Thursday’s Clippers win at the Chase Center, the Warriors brand new, state-of-the-art sports arena, the veteran defensive specialist talked some shit to Steph Curry, the man who has murdered him in the playoffs time and time again.

The two-time MVP was prepared.

Patrick Beverly reportedly told Stephen Curry “You had the last five years, the next five years are mine.”

HA! Beverley is, in fact, 31, which is no spring chicken in NBA terms. Can’t imagine the dude thriving past his 35th birthday.

But, the former NBA All Defensive Second Teamer’s trash talk seemed to hinder Curry’s performance, going 8-of-20 shooting and 2-of-11 from beyond the arc and his number of turnovers matching his field-goal total.

And according to Yahoo Sports’ Chris Haynes, Beverley’s gloating continued in the Clippers locker room.

In the Clippers’ locker room, Patrick Beverley was having some fun with some of the arena staff workers who help tidy up the facility.

That win must’ve felt like pure ecstasy to a man who’s had so few of them against one team.