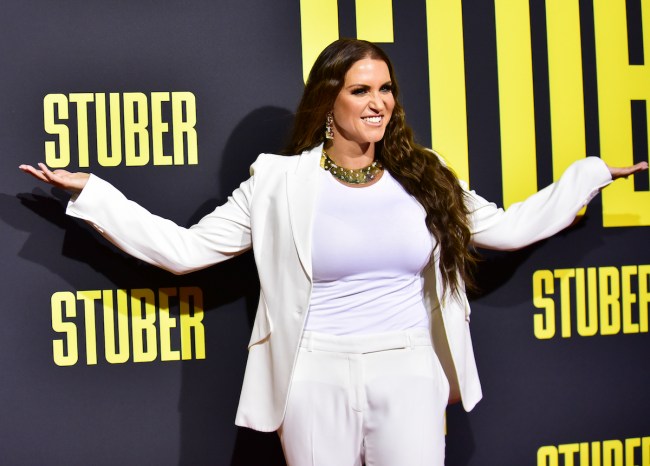 Over the past year, I’ve interviewed numerous professional wrestlers about some of the dangers of the business. If I’m talking to a performer who’s been around for decades, I’ll always ask about the scariest incidents involving fans.

Now, I’m not talking about the minor incidents like wrestlers getting punched in the face by kids, I’m more interested in those moments that could have ended in a terrible situation for either a wrestler or a fan.

A few stories that spring to mind are Ric Flair preventing a riot in Puerto Rico and Ring of Honor star PCO fighting off angry fans trying to choke and stab him.

In some instances, a performer doesn’t even have to be close enough to the crowd to get caught in a dangerous situation. Sometimes, the danger comes in the form of flying objects.

On a recent episode of The Kurt Angle Show, WWE Hall of Famer and Olympic gold medalist Kurt Angle recalled a scary incident that involved WWE chief brand officer Stephanie McMahon and a fan throwing a baseball at her head.

Angle revealed that he planned to call the police about the incident but first decided to tell Vince McMahon about what transpired at the show.

Angle remembers Vince being furious after being told the story and even offering a significant amount of money to find the fan responsible.

“This is crazy. So, I was going to call the police, and I called Vince McMahon instead earlier that night during the show.

Stephanie McMahon walked out down the ramp, and someone threw a baseball at her, and Vince McMahon went to security and said, ‘You find the SOB that did that. I don’t care how much money it takes; you tell fans, you keep offering money until they say yes.’”

So, security was going around asking the fans, and they weren’t going to tell, and they ended up doing a really high number, and one of the fans said, ‘He did it.”

Angle doesn’t know what happened to the fan after being pointed out to security or if he or she was brought up on any charges.