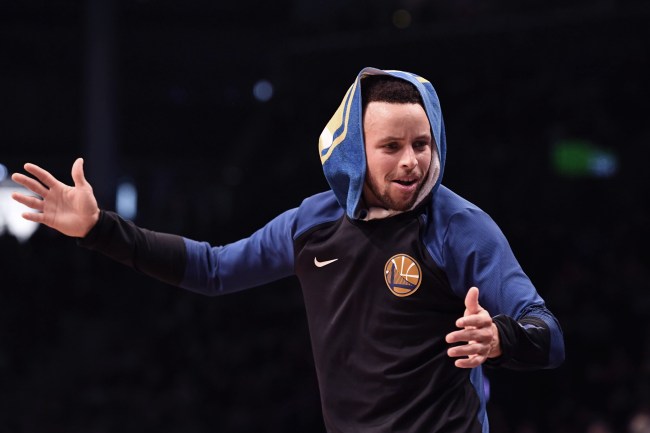 Stephen Curry has had it made for the past five seasons, having All-Star teammates like Kevin Durant, Klay Thompson, Draymond Green and others to help him reach the NBA Finals in each of those years. And while Curry and his Golden State Warriors have won three titles during that span, the team was forced to have a major overhaul this offseason, which started with Durant bolting in free agency to sign with the Brooklyn Nets.

In addition to losing a two-time NBA Finals MVP, the Warriors also traded Andre Iguodala, released Shaun Livingston, lost DeMarcus Cousins and Quinn Cook via free agency and traded for young All-Star guard D’Angelo Russell, meaning Stephen Curry and his Dubs are going to have a really different look next season. Add in Thompson missing time as he recovers from a torn ACL from the NBA Finals, and Curry will have to adapt to all of these different changes.

It’s still only July, so Curry and the new look Warriors aren’t forced to figure it all out instantly. But that hasn’t stopped people wondering what’s going on in the two-time league MVP’s mind amid all the changes, with Steph being as candid as possible about everything that’s happened in the past month since losing in the NBA Finals, talking to the media at the American Century Championship celebrity golf tournament.

First, Stephen Curry addressed his thoughts on Durant leaving, giving a classy answer as he talked about the good times the franchise had during the past three years.

“I mean, the three years that we had were special. With K.D., we had three straight Finals appearances. We won two of them, and we accomplished a lot as a group. Everybody talks about the amount of talent that we had on our team, but that doesn’t guarantee that you can figure it out on the court, that you can put all the pieces together to be successful. I’m really proud of what we accomplished.

“The beauty of free agency is everybody has a decision, everybody has a choice. You want to find your happiness wherever that is. The beauty of the NBA is everybody has that decision at some point, especially guys that deserve it, like KD and other top free agents. I like to look at what we accomplished and focus on that and be extremely proud of this run that we had. Now we are going to have to recreate it in terms of what it means going forward.”

Not only is Curry appreciative of all he and the Warriors did with Durant, but he seems to have accepted the fact that KD, ultimately, wanted to find a place where he was happiest — which apparently meant playing with his friends after winning the rings he did in Golden State.

But Steph also talked about how pumped he is that the Warriors were able to parlay Durant’s departure into a young talent like D’Angelo Russell, describing his excitement to play with the All-Star from last season.

“The noise he made last year was amazing, what they did in Brooklyn and him taking the next step as a certified all-star. I haven’t had much personal interaction with him, on or off the court other than playing against each other. Back when he was drafted, there were some comparisons of our game, how smooth he played, he can shoot, he can pass. Having a guy versatile like that only helps your team.

“The chemistry will develop quickly. We’ll be really purposeful about that and try to set the tone how we’ll play this year. It’s about encouraging each other and having confidence that we’ll bring the best out of each other. Then when Klay gets back as well, we’ll add him to the backcourt mix. It’s going to be fun.”

Finally, Stephen Curry talked about how the Warriors will have to adapt next season. Gone are the days of being the favorites to reach (and win) the NBA Finals. While the core is still there — like himself, Thompson and Green — the point guard knows it’s going to be a new challenge trying to maintain the level of expectations the team’s had the past five years.

“It will develop as we get together as a group. A lot of changes. It’s a tough way to end the Finals with K.D. and Klay getting injured, and obviously free agency. For us, our core, myself, Klay (Thompson), Draymond (Green), adding D’Angelo and a lot of hungry, young guys trying to prove themselves in the league, it’ll look different in terms of the lineups and things like that. But the expectations of how we play, that championship-caliber basketball, that for us will always be the motivation and the challenge.

“I’m excited, to be honest with you. Five straight years in the Finals and we’ve accomplished a lot, and three championships. There’s a lot to be proud of. But everybody wants a new challenge in terms of how do you get back to that level.”

It’ll be interesting to see how things mesh next season for the Warriors. While Stephen Curry’s optimistic and excited about some of the changes, who knows how it’ll all actually go down — especially with the amount of moves other teams have done to close the gap on the Dubs. One thing’s for sure, though, Steph isn’t going to back down from the challenge.