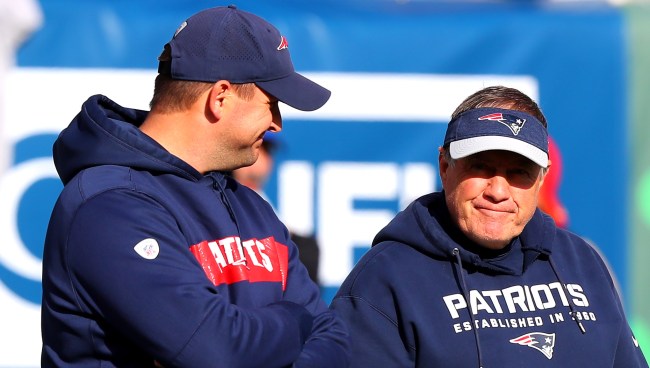 The New York Giants stunned the football world on Tuesday when it was revealed that they were going to hire New England Patriots wide receivers coach Joe Judge to become their next head coach.

It was a move that pretty much no one saw coming as rumors had already begun spreading that recently fired Dallas Cowboys head coach Jason Garrett was the Giants’ fallback option after losing out on Baylor coach Matt Rhule when he was snapped up on Tuesday by the Carolina Panthers.

Following the reports of Judge’s hiring by the Giants, Stephen A. Smith went off on the franchise during a segment of First Take, ripping the team for not only hiring someone most NFL fans had never heard of, but for basically ignoring the Rooney Rule completely.

“I need to be very, very careful about what I have to say. Joe Judge, if you’re watching this show, I’ve never met this man. I’m not questioning the man’s capabilities at all. I know nothing about him. So, I want everyone to understand that my criticism — and it is a criticism — of this choice by the New York Giants, who are regressing before our very eyes as a standard in the National Football League,” said Smith.” “Here’s the reason I say this. And, again, Mr. Joe Judge, to you and your family, I apologize. These comments are not directed towards him … This is the issue: You’re the New York Giants! It’s the media capital of the world! It’s a franchise that L.T. was once the face of, Phil Simms, even Jeff Hostetler, Bill Parcells! I mean, Michael Strahan! Are you kidding me?!

“And you come to the New York market — the media capital of the world, this bubble — with JOE JUDGE … You’re the wide receivers coach of the New England Patriots. What have we been saying all year? THEY DON’T HAVE ANY. So, that is the position that you’re coming from. I wish him nothing but the best, but the Giants — you’re the New York Giants. And this is what you come with?”

Smith went on to rail against the NFL for how its teams go about hiring head coaches.

“You know what? We speak constantly and we preach in our society about going through the proper channels and the proper levels to elevate yourself to another level. And I’m telling you something right now. I am getting sick to my stomach at guys that I see — I’m just going to say it because nobody else, most people won’t. This don’t happen for black folk,” said Smith.

“A wide receivers coach that becomes the head coach. Eric Bieniemy is in Kansas City. Now, he’s the offensive coordinator even though he’s not the play-caller. That would be because the great Andy Reid is the one calling the plays. This guy gets those gratuitous interviews that don’t really amount to anything. I don’t know who they brought in for the Rooney Rule. The Cowboys brought in Marvin Lewis. And by the way because someone had that conversation with somebody about Marvin Lewis. Marvin Lewis coached in this league for 16 years. I know that Marvin Lewis deserves to be a head coach in the National Football League, but there’s something to be said about not winning a playoff game in those 16 years. There are plenty of African Americans in the National Football League, who by the way happen to be coordinators, that deserve a look.”

Later in the segment, Smith elaborated on his feelings about the league’s “bogus” Rooney Rule.

“WE GOT A PROBLEM! THIS IS SOME B.S. AIN’T NO WAY AROUND IT!” Smith shouted after discussing the successes of Mike Tomlin, Brian Flores and Anthony Lynn. “WE MOVIN’ IN THE REVERSE DIRECTION!”

And yet, “Since 2000, 11 coaches have been dismissed after just one year. Three of them have been black, or 27 percent,” he added.