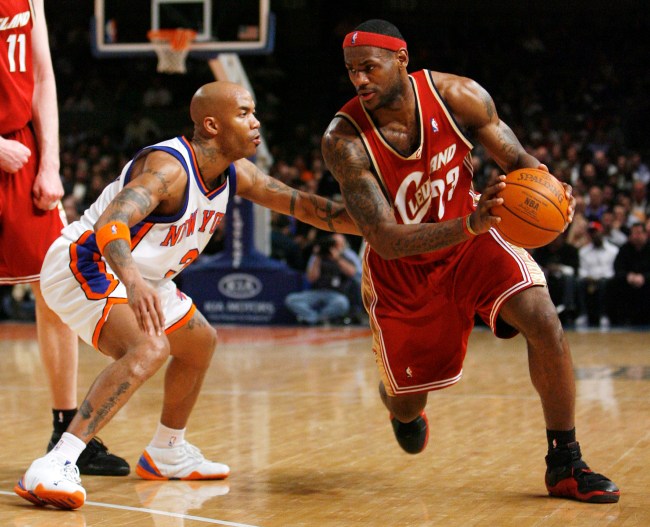 Former NBA All-Star Stephon Marbury really took some serious shots recently; and I’m not talking about ones on the basketball court. That’s because, during an Instagram Live sesh, Starbury fired off tons of criticism towards LeBron James, attacking the Lakers’ star’s game (especially in the NBA bubble without fans), and, of course, the fear James has in just letting go of that receding hairline he’s got going on.

Stephon Marbury on LeBron James: “He shoots different without fans.”

Stephon Marbury on LeBron's hair: "I know he didn't put a rug on his head."

"I don't have no hair on his head. Somebody sent me a clip where his head was over his headband."

"What was that about?"

Stephon Marbury on LeBron James' hair: "How you gonna have a bald spot and then the next season it's all black?

Stephon Marbury on LeBron James: "I seen a dude put glue on his head. Don't that hurt? How you take a shower?"

"If you saw me speak to you and I have a whole bunch of waves [in my hair]…how do you do that and you know a little bit of water it's gonna stink. Do you blowdry?"

Stephon Marbury says LeBron James' barber spends five minutes on one side of his head when he gets a shapeup & he puts his du rag on crooked afterward.

Marbury also says the Lakers All Star pays TNT & ESPN cameraman to use certain camera angles as filters during games.

Sheesh, that’s a helluva lot of shit being talked by Stephon Marbury — who became an icon in China once he moved overseas to play ball, and, prior to that, was a prep superstar in Brooklyn leading up to his one year in college at Georgia Tech. That said, given the Lakers’ struggles since entering the NBA bubble, which included a Game 1 loss to the Portland Trail Blazers Tuesday night, Starbury’s criticism of James may be warranted.

What makes all this even wilder is that the two guys were actually one teammates on Team USA during the 2004 Athens Olympics, where they won a Bronze medal together. That was nearly two decades ago, so, yeah, it doesn’t seem like they’re really exactly buddy-buddy.

Plus, this isn’t the first time Stephon Marbury went after LeBron James. While the former No. 4 overall pick in the 1996 NBA Draft does agree that James is a great basketball player, when it comes to the whole GOAT debate, Marbury recently said that The Last Dance documentary focusing on Michael Jordan and the Chicago Bulls would show a younger generation why MJ is top dog.

“All the kids have to watch it and they’re gonna be like, ‘Daammmnnn! This is crazy!’ So it’s kind of like going to mess things up for guys like LeBron James and them saying like – You can’t say that LeBron Jmaes is better than Michael Jordan? C’mon man. LeBron’s a great player. Don’t get me wrong. A great, great player. Unbelievable. Amazing. But better than Michael Jordan? – it’s not even the same. It’s just different. In fact, it needs no explanation or explaining because we can’t talk about Jordan’s game. It’s like we need to talk about what people are ‘not.’

“People wanna rank Jordan? Jordan shouldn’t even be ranked. It should be Kobe, then LeBron and then you can pick guys after that. There’s just no comparison man. It’s not the same. It’s just different worlds. Different mentalities. I don’t know why Jordan’s name is mentioned in the same conversation sometimes. I’ll clear that up real quick…there’s really no need to talk about that.”

Marbury may be critiquing LeBron James hard AF, but, c’mon, the dude is the self-proclaimed “King,” so he warrants it when his team doesn’t play well — as is the case with the Lakers right now. While James himself has continued to ball out, when his team loses, the superstar gets the finger pointed at him.

More than his game, though, James absolutely needs to address that hair situation of his. Bro, come home. It’s time to let go of the little strands you have left and shave it off already.