LeBron James’ ‘Restored’ Hairline Had A Major Glitch During Recent Game, And Anthony Davis Seemed To Clown Him For It 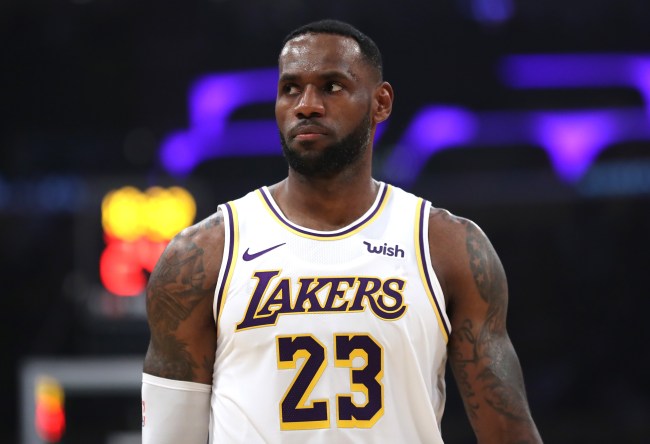 LeBron James’ hairline is the one thing that the greatest basketball player on the planet just can’t shake. While James has dominated the hardwood since he was a teenager, rising to fame and becoming a universal sensation, Father Time continues to keep him humble every time he looks in the mirror, as the four-time league MVP continues to try to disguise the fact that he’s as bald as my Uncle Chris is — which, for all those reading, is full Statham.

Instead of embracing his fallen locks, though, LeBron James has refused to “come home” and just shave it all off. Instead, he actually posts videos on social media that make it look like he’s got a full head of hair and that there never has been a problem with it. Hilarious, right? Nobody buys it, Bron, so it’s time to just let it go.

The latest gaffe in LeBron James’ hairline didn’t happen on social media, though, but, instead, during a recent game against the Utah Jazz. That’s because, while on the court, James was called out by teammate Anthony Davis about his misshaped hairline, which seemed to have been axed up because the plugs James has fell out. Take a look at the video below.

It’s one thing to try and disguise something like this in private or on social media, it’s another thing when the hair is punking the three-time champ by hopping off his scalp while he’s doing the one thing that he’s better than anyone else at; playing hoops. Poor LeBron James, because, naturally, Twitter lit him up after seeing this little incident.

Anthony Davis tells Lebron James to fix his hair cause it's falling out #lakers #lakeshow pic.twitter.com/7LqjEk62VU

LeBron James holding on to the hair for dear life! #fireitbeforeitquits pic.twitter.com/TVjFffGTor

LeBron James doesn’t need much coaching when it comes to playing basketball or running a successful business. But when it comes to his hairline, he could use someone to tell him that it’s officially time to pull a Michael Jordan and just rid himself of it all. It’s not an easy decision by any man, clearly, but how in the hell can it be more difficult than any of the free agency moves that he’s ever made in the past?