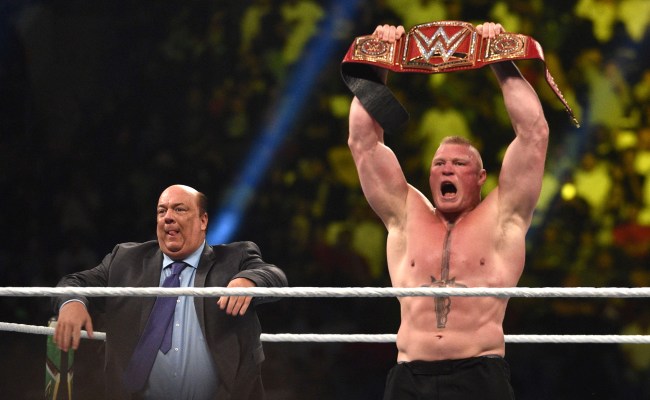 However, “social” would not be one of those words that would immediately come to mind when discussing “The Beast Incarnate.”

But maybe it should be. At least based on this story told recently by WWE Hall of Famer Booker T and verified by former wrestler turned WWE broadcaster Corey Graves.

On January 26th, 2015 a massive blizzard hit the northeast causing that night’s RAW show in Hartford, Connecticut to be canceled.

That same night, back in Stamford, Connecticut at WWE headquarters Lesnar, Roman Reigns and a few other wrestlers and broadcasters were in the house expecting to do some live interviews in the studio.

With nothing else to do, Lesnar, Reigns, Booker T, and JBL headed out to a local bar.

“We were in a bar that night and it was coming up on 2 o’clock in the morning telling stories and talking and the lady at the bar was ready to go,” Booker T explained. “She was shutting it down and said last call. We asked if she would stay open for another hour and she said ‘No, we’re shutting it down right now. Okay guys, if you want to get another drink you better get it right now.’ We were getting ready to wrap it up and Brock Lesnar walked down and we told Brock she’s wrapping us up.

“We gotta get out of here and Brock said ‘Hold on, let me go talk to her.’ Brock goes to talk to her and literally 2 minutes later, the bar is open for another hour, no problem. I don’t know what it was, but that big viking went over, man. He told her something and the bar was open. We stayed there and we drank till we closed it down and everything was fine. I don’t know what he told her, but definitely drinks were on the house.”

Graves and numerous others that were in the WWE HQ studio also eventually made their way to the bar where Lesnar and crew were imbibing. He recalled what he remembers from the night recently on an episode of his podcast, After The Bell.

“RAW was supposed to take place in Hartford, Connecticut, and there was a state of emergency declared so the live event was cancelled. It wasn’t allowed to happen, but RAW still took to the air that night. I was lucky enough to be in the TV studio watching all of the worker bees work seeing what amazing capabilities the TV studio and team could pull off. There were a few SUVs loaded up from Hartford. It brought some talent from Monday night RAW to the TV studio where the crew cobbled together three hours worth of actually surprisingly entertaining programming considering the circumstances.

“That night stands out to me because it was the first time I encountered Brock Lesnar in person. I found myself in a conference room sitting beside him, and there was an awkward silence. Neither of us knew each other or what to make of one another other than the fact that I was as terrified of him in person as I had been for years on television. So did what any reasonable human would do in that situation: I complimented ‘The Beast’ on his jacket which surprisingly led to a fun little exchange. A conversation with Brock Lesnar, who at that particular juncture, did not decide to tear me limb from limb. Lucky me.”

Graves then discussed what happened after the show.

“They re-aired the Royal Rumble match from the night before [and aired] a few backstage interviews with Roman, Brock and many others, and allegedly, [the] now WWE Champion paid a significant amount of money to keep the bar wide open for everybody to make sure they made the best of a crappy situation. I, of course, stayed in a completely different hotel, but it led to me finding the only open establishment in the scenic Stamford, Connecticut where myself and two-thirds of The Shield made sure that none of the beers at said establishment went unattended.”