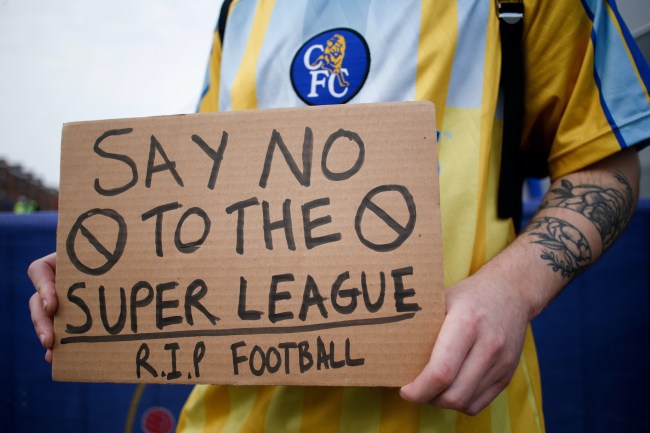 After sparking unprecedented backlash with the announcement of The Super League on Sunday night — a 20-team competition that would’ve seen the game’s elite clubs branch off into their own sequestered league — some of the billionaires behind the footballing Frankenstein have already begun backing out, with reports now indicating that Manchester City, Chelsea, Atletico Madrid, and Barcelona are preparing to withdraw from the league, with other clubs reportedly preparing to follow suit. Given the current momentum in the soccer community, it appears that The Super League is on the fast track to death row.

Given the sheer chaos in the soccer world right now, and the rapidness at which news regarding The Super League is breaking, this article will be updated live with all of the latest information.

Tuesday’s Chelsea vs. Brighton match was delayed due to protests outside the stadium:

Manchester United fans have been calling for Ed Woodward to lose his job for years. Now, as a result of the backlash to The Super League (Woodward would’ve been one of the league’s co-chairs), he’s out the door.

BREAKING: Ed Woodward has resigned as chairman of Manchester United.

Woodward’s decision comes after the backlash over the European Super League.

BREAKING: All 12 clubs are meeting tonight to discuss disbanding the Super League.

🚨🚨| Andrea Agnelli has resigned as the president of Juventus.

There is speculation the Glazer Family could sell Manchester United:

Incredible. Was told the collapse may well see the Glazers cash out. This points in that direction. https://t.co/lUEjOKAyKc

Chelsea and Manchester City have officially withdrawn from The Super League, per The Athletic:

The first domino has fallen. Chelsea to withdraw from European Super League….. https://t.co/AIXUn3REz5

All Liverpool players have posted the following message to social media opposing The Super League:

U.K. Prime Minister Boris Johnson has released a statement commending Manchester City’s and Chelsea’s decision to walk away from The Super League

The decision by Chelsea and Manchester City is – if confirmed – absolutely the right one and I commend them for it.

I hope the other clubs involved in the European Super League will follow their lead.

Liverpool, Arsenal, Tottenham, and Manchester United have announced their withdrawal from The Super League:

We will not be participating in the European Super League.#MUFC

Liverpool Football Club can confirm that our involvement in proposed plans to form a European Super League has been discontinued.

We can confirm that we have formally commenced procedures to withdraw from the group developing proposals for a European Super League (ESL).#THFC ⚪️ #COYS

The sudden reversal from those in charge of these various clubs just proves that the soulless billionaires making the decisions were simply trying to create The Super League because they thought they could. They thought the fandom would shut up and take their medicine like they have for the past generation. They were wrong.