Despite Covering The Spread In A 59-0 Shutout, A Loophole Kept Syracuse Bettors From Getting Paid 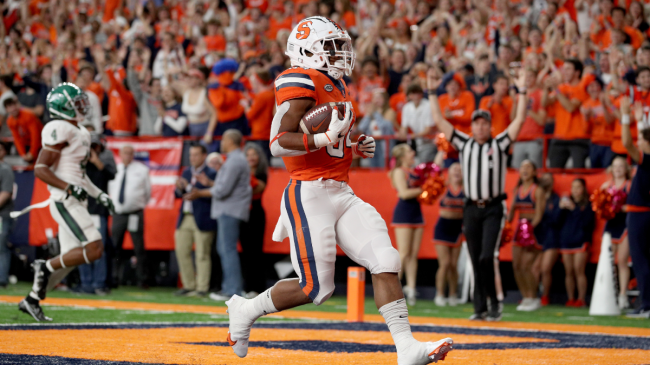 Syracuse looked dominant in its 59-0 shutout win against Wagner over the weekend. The victory helped the Orange move to 5-0 on the season as they head into ACC play.

The team has already ripped off a few impressive wins, taking down Louisville, Purdue, and Virginia over the first four weeks. Wagner was meant to be a tune-up game before Syracuse has to take on NC State and Clemson in back-to-back contests.

And a tune-up game it was.

The Orange jumped out to a 49-0 halftime advantage, leading the two coaching staffs to make an in-game adjustment. Rather than play out the final two quarters of action as planned, they opted to reduce the periods to 10 minutes apiece.

Syracuse bettors miss payday due to shortening of game vs Wagner

Sportsbooks require 55 minutes of game action to be played in order for bets to be paid out. With the move to 10-minute quarters in the second half, this game ended just shy of that mark at 50 minutes of play.

The failure to match that number resulted in voided tickets for all game bettors. Even though the Orange covered the massive 53-point spread, those that backed Syracuse went home empty-handed.

It’s not the first time that something like this has happened. It often occurs in FBS vs. FCS matchups where one side just looks completely overmatched. The adjustment helps shorten the game, reduce chance of injury, and maybe save a bit of face for the losing team.

Still, it won’t make it any easier for bettors to swallow as they were clearly on the right side of this mismatch. I guess if you want to find a bright side in all of this, it’s that Wagner backers got their original deposits back despite their team getting crushed by nearly 60 points.

Tough break for Syracuse bettors, though.