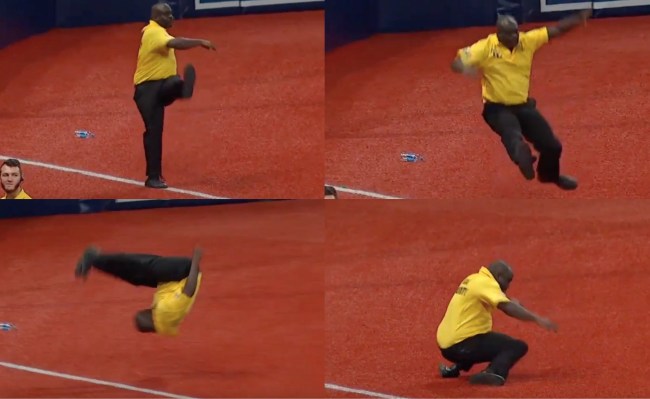 The Tampa Bay Rays were facing elimination at home last night in the ALDS Game 4 against the Houston Astros. The Astros pounced on a 2-0 series lead at home in Houston before the Tampa Bay Rays took both games at Tropicana Field to even the series and force a Game 5 back in Houston on Thursday night.

The Rays are now 3-0 in elimination games in the 2019 Postseason after they also won the American League Wild Card game against the Oakland As. Only 10 teams in MLB postseason history have won 4 elimination games so the Rays have a tall task ahead of them.

The ALDS Game 4 was only the 2nd time in Justin Verlander‘s career that he had surrendered multiple runs in a potential series-clinching Playoffs game. The dude has been CLUTCH throughout his entire career. I think he even threw another no-hitter last month (or maybe it was the month before).

What pushed the Rays to even the ALDS series at 2-2 last night? Was it the fact that Tropicana Field was sold out and LOUD AS HELL with support for the home team? Or was it because yours truly was sitting five rows behind home plate last night and out of the 5 Rays playoffs games I’ve been to over the years I’ve never been there for a loss?

Aren’t you supposed to lean into that when your team’s losing? #HOUvsTB pic.twitter.com/JdskA4U3fd

Verlander was my fantasy baseball savior over the years. Any other night I’d hate to see him shit his pants in the playoffs. Not tonight. #RaysUp #StayHungry #TBvsHOU pic.twitter.com/ZjX3kCpzdS

Or was it this security guard at Tropicana Field who electrified the crowd with his outrageous dance moves that were projected on the jumbotron in the outfield and sent the St. Pete fans into a frenzy? Speaking as someone who was there last night, it was either this dude’s dance moves or my presence. Definitely not the fact that the Rays manufactured runs by getting people on base ALL NIGHT.

This security guard absolutely crushed it DO NOT COME AT HIM 🕺🕺 pic.twitter.com/rVdos3Y80u

The dude killed it. Frankly, I’m shocked he didn’t throw out his back. It’s not like he’s a spring chicken and in pro-athlete shape.

Fans were loving it:

who is this security guard breaking it down after the commercial break? he is my favourite person rn😂😂😂 @RaysBaseball

The Rays security guard just hit the woah harder than anyone ever has before. Incredible stuff, I’m shaking

not a single soul:

This was all eerily reminiscent of this security same guard’s dance from 2014, also during a Houston Astros game, but this time it was in St. Pete at Tropicana Field.

Rays beating the Stros so bad they took their dancing security guard.

The Tampa Bay Rays won Game 4 of the ALDS by rolling out their bullpen instead of a proper starting pitcher. In the ALDS game 5, Houston’s Gerrit Cole will face Tampa’s Tyler Glasnow. Glasnow has a 1.78 ERA on the season across 12 games. Gerrit Cole is battling his own teammate Justin Verlander for the AL Cy Young Award.

The dude is a cyborg.

Houston is a -270 favorite to win Game 5 (via Fanduel) and my Tampa Bay Rays will need a miracle to keep their season going….Which means they’ll need this security guard in Houston busting out his dance moves. That, or I should get on a plane tomorrow morning to catch the game.