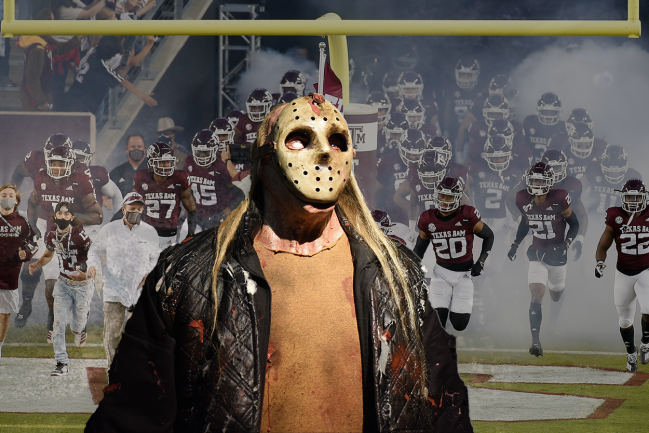 The current landscape of college football recruiting is absolutely wild. It has always been a crazy process, but with social media and NIL, image has become more important than ever.

Every school across the nation is trying to one-up their opponents in terms of virility and clout.

There have been a lot of really cool finished products that come from the media arms race, like Notre Dame’s cathedral shoot, a recruit dunking on his own dad, a five-star quarterback taking pictures in a G-Wagon, and Lane Kiffin taking extremely icy pictures with recruits in his Aston Martin. There have also been a lot of very bad finished products, like Dabo Swinney sitting on a recruit’s lap and Brian Kelly grinding on high schoolers.

Over the weekend, Lebbeus Overton got in on the media craze. The five-star defensive tackle in the Class of 2022 not only has an incredible name, but he is an immediate impact player at 6-foot-3, 270 pounds. He is considered a heavy Texas A&M lean, but Georgia, Oklahoma and Ohio State are also in the mix.

Lebbeus Overton visited College Station for a campus visit and took one of the wildest recruiting videos to date.

With a deadline to make a commitment quickly approaching, Overton stopped back by Texas A&M to (likely) make sure that is where he wants to be.

While on campus, he took a terrifying video. Overton donned a mask that looked a lot like Jason’s from ‘Friday The 13th’ and held a chainsaw.

As lights flashed around him, the Georgia-native walked toward the camera in ominous fashion. Take a look:

While there are many different ways to describe this video, creative is the most neutral. As much as it is really cool, it is also really weird.

Thus, creative is the best way to go. There has not been a recruiting video more creative than the one from Overton’s most recent visit to A&M.