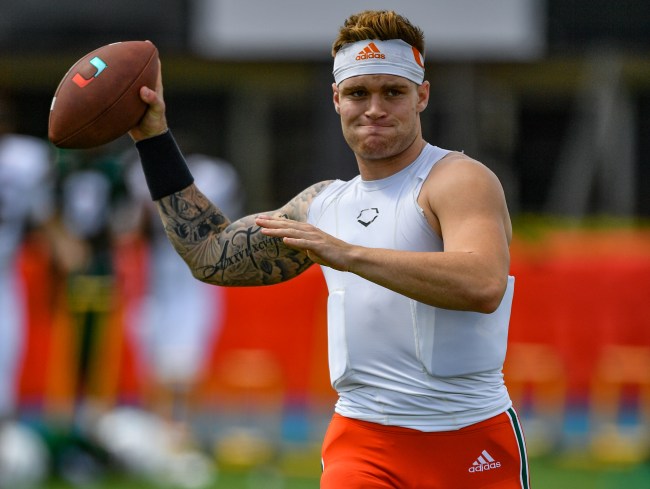 The dynamic quarterback was THE guy in high school, winning Gatorade Football Player of the Year after leading Desert Pines High School in Las Vegas to a 15-0 record, topping off a career record of 45–0 as a starter and finishing second in Nevada history with 7,510 passing yards and 113 touchdowns. I’d probably whack it to myself too.

But big time Division I is a different beast, and Tate’s found that arrogance comes before the fall.

After transferring to Miami from Ohio State, it was announced this week that Martell lost out on Miami’s QB gig to redshirt freshman QB Jaren Williams, who will get the start against Florida.

According to 247Sports, Martell didn’t show up to practice Monday in the wake of him losing the three-man quarterback battle. A representative for The University of Miami said that Martell is still on the program’s roster when reached for a comment. Barry Jackson of the Miami Herald tweeted that Martell attended a team meeting later in the night.

If you’re wondering why the college football world is dancing on the grave of Martell, who many believed was going to be able to win the starting job after N’Kosi Perry struggled last season, look no further than below.

Back in December, before Martell decided to leave Ohio State and to transfer to Miami after former Georgia quarterback Justin Fields announced his decision to go to compete for the Buckeyes starting QB job, Martell sent a low-blow tweet mocking Fields’ initial struggles. He also liked a tweet from a nobody saying “My mans is saying don’t transfer schools and get beat out again…”

OSU QB Tate Martell has something to say about the Justin Fields-to-OSU rumors 👀🍿 pic.twitter.com/2Nh9e7ABdG