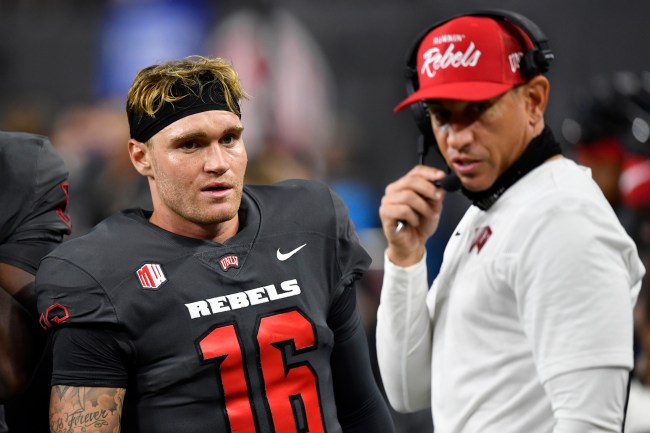 Tathan Martell, better known as Tate, had a tumultuous journey through college football, but it appears to have come to a close. Per Franchise Sports Media’s Joe Arrigo, the 23-year-old has retired from football.

In retirement, he apparently has big business ventures in the works. Whatever that means is unclear, but Arrigo says that it is “about to blow up.”

I wanted to give an update on #UNLVfb QB @TheTateMartell: He is retired from football and focusing on business ventures.

He is grateful for @coacharroyo and UNLV for giving him a chance.

I would also keep an eye on what tate has going on business wise, it's about to blow up.

This officially ends one of the most bizarre college football careers of all-time.

Martell, who was a five-star quarterback recruit (depending on where you look) in the class of 2017, was featured on the Netflix series ‘QB1: Beyond the Lights.’ His class also included Tua Tagovailoa, Sam Ehlinger, Kellen Mond, Davis Mills, Jake Fromm and Kenny Pickett, among others.

As such a highly sought-after recruit, Martell first committed to the University of Washington when he was 14 years old. In 2015, he flipped his commitment to Texas A&M.

However, in 2016, he transferred high schools so that he could graduate early and enroll at Ohio State. Upon arrival in Columbus, he served as the backup for Dwayne Haskins in 2018.

In January of 2019, Justin Fields announced that he was transferring out of Georgia to join the Buckeyes. Martell did not take kindly to the news and tweeted out a cryptic message that has since been deleted:

… especially not your second time

Even before the news broke about Fields’ transfer, Martell addressed the rumors. He said he was not going anywhere.

“Why would I leave for someone who hasn’t put in a single second into this program?” he said. “To just run away from somebody who hasn’t put a single second into workouts anything like that and doesn’t know what the program is all about, there’s not a chance. I will [be the starting quarterback]. I am 100 percent sure on that. I am not just going to walk away from something that I have put so much time into and there is not a chance that I won’t go out there and compete for that.”

Less than 14 days later, he entered the transfer portal.

After leaving Ohio State, Martell transferred to Miami and expected to be the starter for the Hurricanes. He was not. In fact, he was named the third-string in 2019.

With his name so far down on the depth chart, Martell tried to make a switch to receiver. He played sparingly in the slot that season but never really stood a chance to make an impact at the position and hoped to be the starter at quarterback in 2020.

Once again, that was not the case.

Former Houston quarterback D’Eriq King transferred to Miami and Martell chose to opt out of the season due to the COVID-19 pandemic. When King announced that he was coming back in 2021, after almost quitting football, Martell decided to transfer once again.

Prior to last season, he announced that he was returning home to Las Vegas to play for UNLV as a graduate transfer. That didn’t last long either.

Martell did not earn the starting job with the Rebels. An injury was in part to blame and he was limited to just two appearances at UNLV in 2021.

Now, six months after his fifth commitment, Martell is hanging up the cleats.

As for what is next, that is unclear.

Martell is focusing on business ventures moving forward. Arrigo says it is “about to blow up.”

The options are literally endless, but as soon as we know what Tathan Martell is up to in 2022, we’ll be sure to let you know. What a ride it has been.