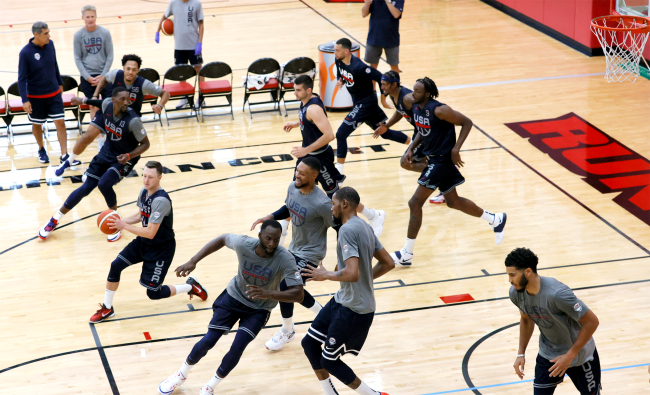 Team USA men’s basketball team revealed the new jerseys players will be wearing at the Tokyo Summer Olympics and the reactions are… good?

I added that question mark because, frankly, with all of the terrible looks being cranked out by uniform manufacturers lately, it’s a bit of a surprise.

The Stars Have Aligned

“We are excited about the 12 players who have been selected to represent the United States in the Tokyo Olympics,” said USA Men’s National Team managing director Jerry Colangelo. “This was an unusually challenging selection process for many reasons, including the year postponement of the Olympics and the issues related to the timing of the NBA regular season and playoffs.

“Our roster features players who are experienced in the international game, and this team has outstanding athleticism, versatility and balance. We also believe we have excellent leadership which is a necessity in order to develop the needed chemistry. We still have a lot of challenges in front of us, but I believe these players will become a team that all Americans will be proud of.”

Check out how some of the players will look in their new kits when you tune in to the one-year-delayed Summer Olympic Games from July 23 through Aug. 8.

It’s about as close as you’ll get to seeing them play in these new uniforms because as of Thursday the Summer Olympic Games in Tokyo will be held without spectators due to a declaration of a state of emergency in the area thanks to a rising numbers of COVID-19 infections.