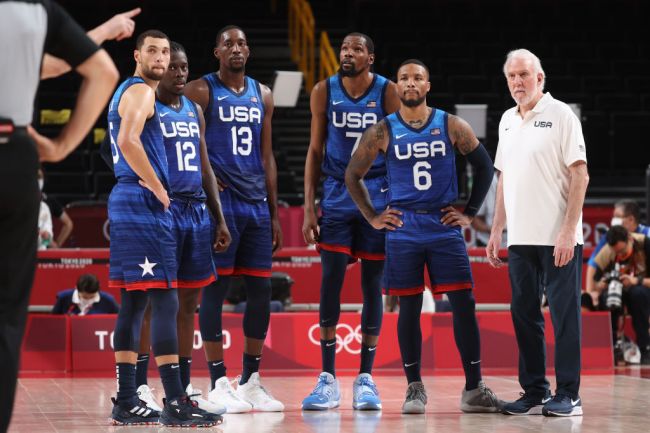 Team USA had their 25 game winning streak snapped at the Olympics in their first game against France on Sunday and players are apparently already pointing the finger at coach Gregg Popovich.

After the team’s loss, The Athletic’s Joe Vardon revealed that some players on the team were complaining about running Popovich’s “San Antonio offense” while on their way towards the locker room.

To be clear, Popovich is horrified by his own record coaching this team. He dwells on it and hates the losing. The players are frustrated, too, grumbling on their way back to the locker room about “running the San Antonio offense” when apparently they feel like there are better ideas. Pop has said, because of the truncated nature of Team USA’s training camp, the offense would be based on “concepts” instead of set plays.

While speaking to the media Popovich downplayed the loss by saying Team USA lost to a pretty good French team.

“When you lose a game, you’re not surprised. You’re disappointed. I don’t understand the word ‘surprised.’ That sort of disses the French team, as if we’re supposed to beat them by 30. That’s a hell of a team.”

It’s going to be interesting to see if Team USA can bounce back but as of now they look disinterested in playing basketball while in Tokyo.