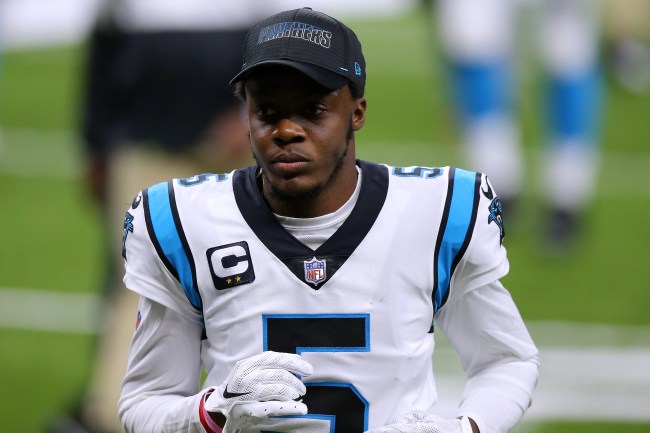 Just a few months ago, Teddy Bridgewater signed a massive $60 million deal to takeover the starting quarterback gig for the Carolina Panthers, replacing a legend in Cam Newton. That seemed to be a tough task, but through nine games so far this NFL season, the signal-caller has produced some solid numbers, totaling 13 touchdowns (11 passing, two rushing), and proving he was worth the big money.

But just because Bridgewater has millions in his bank account doesn’t mean he’s all boujis and needs lavish things to be happy. Need proof? Just look at what the dude did to celebrate his 28th birthday earlier this week, per the Charlotte Observer’s Alaina Getzenberg.

Teddy Bridgewater says that he went to Olive Garden for his 28th birthday Tuesday. "Had some salad and some bread."

Wow, I’m nearly speechless about this. In what universe does Teddy Bridgewater live in? The dude is in his twenties and has millions of dollars at his disposal, yet he decides that the Olive Garden for some salad and bread was the way to celebrate? I mean, sure, Charlotte isn’t typically recognized as a party city or anything, but wasn’t there a better option than this? It’s like Bridgewater just relived his high school homecoming date all over again by snacking on unlimited breadsticks — except he’s an NFL quarterback! This is nutso.

As one might imagine, after social media found out about Teddy’s “wild party” at Olive Garden, they had all the reactions. Take a look at what some were saying on Twitter.

Yessir!!! The rich stay rich by acting broke. And the broke stay broke by acting rich 😂😂😂😂

He’s the Olive Garden of the nfl. It’s decent but will never blow your mind

Unless it’s 3rd down, then he’s forcing everything to Curtis.

I like to picture Teddy doing everyday normal things, like eating at Olive Garden, while wearing his gloves. pic.twitter.com/jMByVQtMX1

As if that wasn’t enough, when Teddy Bridgewater had his press conference on Friday morning, the quarterback showed up wearing a referee outfit and actually threw a flag at a question he didn’t want to answer. What in the hell is going on out here?

Former Carolina Panthers quarterback Cam Newton was known for wearing outrageous outfits to news conferences, but not once did he wear a black and white striped official’s shirt, as his replacement did Thursday.

“I’m here to throw a flag on any questions I don’t want to answer,” Teddy Bridgewater said with a big smile.

When pressed for details, Bridgewater quipped, “I just came back from my other job at Foot Locker.”

Bridgewater insisted the timing of his outfit had nothing to do with trying to emphasize how much penalties hurt Carolina against the defending Super Bowl champions or the Bucs (5-3).

He blew an imaginary whistle and flagged the question suggesting he had an ulterior motive.

“The shirt had nothing to do with that, but we understand [penalties] … that’s a part of beating ourselves,” he said. “If we can eliminate those penalties, negative plays … then we’ve got a pretty good team.”

I don’t know about you, but, deep down, it sure seems like Teddy Bridgewater really is just a suburban dad who can’t get enough of the simple life. Whether it’s Olive Garden for a birthday dinner or this whole dressing like a referee stunt, I know plenty of 45-year-old guys with three kids who live for stuff like this. Congrats, Teddy, you’re officially the most normal pro athlete I’ve ever seen.