New Tennessee Titans GM Should Already Have A Plan At Quarterback 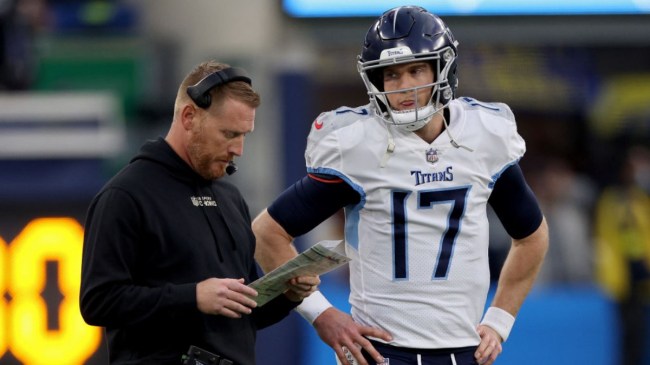 After their last GM’s disastrous handling of AJ Brown’s contract situation, the Tennessee Titans found themselves looking for a new GM this offseason.

It didn’t take them long to find him as they brought in former 49ers director of player personnel Ran Carthon.

Today, Carthon had his introductory press conference for the Titans.

Media members had plenty of questions for Carthon, but he unfortunately couldn’t answer one very important question. What are the Titans going to do with Ryan Tannehill?

I don’t think that’s fair at this point. We’re still evaluating the roster. Ryan has been great here. He’s won a lot of football games. I look forward to us winning football games. But I still need more time to evaluate and make those decisions.

There is no bigger question facing the Tennessee Titans right now than what to do at the quarterback position.

You would think that when they made their GM hire, they’d have brought somebody in who had the answer to that question already.

Everything they do this offseason should be determined by what they choose to do with Ryan Tannehill.

If they want to stick with Tannehill for another year, that means they intend to try and win. To do that, they’re going to need to make some major improvements after only managing to win 7 games in football’s worst division.

On the other hand, if they don’t plan to continue with Tannehill, it likely means they’re turning their focus to the future and should start trying to add draft capital before April.

It’s easy to believe that the second option is the right answer.

We’ve seen a pretty clear ceiling for the Titans with Tannehill and the team has been getting progressively worse over the past few years after making a run to the AFC Championship Game in 2019.

In those three years, he has put them in exactly the position you don’t want to be in as an NFL franchise.

They haven’t been good enough to win a playoff game in either of the past 2 seasons, but have been just good enough to keep themselves from landing a franchise quarterback.

It also usually doesn’t bode well when you’re paying a quarterback over $36 million and aren’t entirely sure if you want him to continue to be your QB.

Sometime soon they’re going to need to decided if they’re all the way in or all the way out or they will continue to hang around in this limbo.

It looks like their new GM doesn’t know yet which side he lands on.