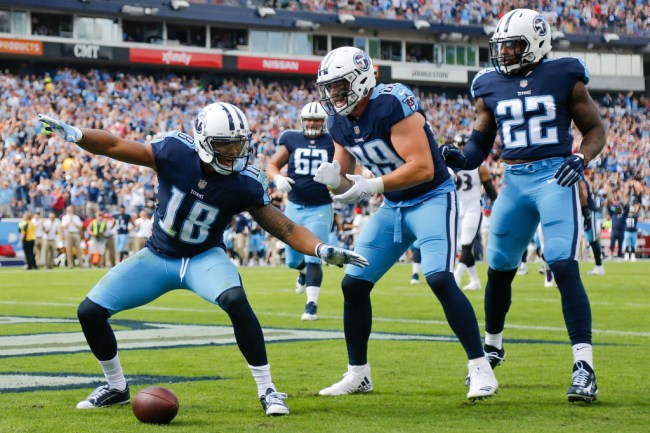 Last month, the Tennessee Titans official Twitter account teased their long-awaited new uniforms that are set to be unveiled on April 4th.

It appears that a picture of the new jerseys have already leaked on the Internet ahead of the team’s big unveiling on Wednesday night .

New leaked pic confirms these are the Titans' new jerseys. Man, do they ever suck. Nike is basically ruining the NFL's aesthetic one team at a time. pic.twitter.com/11LjwWvMfl

The NFL isn’t happy about the leak and is currently launching an investigation to find out who posted the photos online.

The NFL is investigating the source of a photograph making the rounds on social media that purports to show the Titans’ new home jersey, a league source told The Tennessean on Tuesday.

An NFL spokesperson declined to comment on the photo, on whether leaks like this are to be expected once the product is shipped to retail outlets, or what can be done to prevent leaks from happening. The Titans did not respond to a request for comment

Titans fans don’t appear to be impressed with the new jerseys.

Looks like they forgot about the “new” part… pic.twitter.com/ggtLTgIfcW

Looks as though the Titans' new jerseys have leaked, just two days before the reveal.

Design is underwhelming, especially with how the owner hyped it up. Grey is meh. Sword yoke is pretty nice. Font, meh. Red and Columbia blue lacking is really unfortunate. pic.twitter.com/wsOyKgxBBB

They DO Suck ! Houston Oilers old players must be wincing. Ya know, that'd be a good color scheme, the old Oilers uniforms, or a similar design.

It’s pretty garbage if I’m being honest. If this is really it then I hope it grows on me.

If these really are the new jerseys then maybe the Titans should take a moment and go back to the drawing board because they’re not that nice. We do have to wait an see how the jersey match up with new helmet/pants combo to determine whether they are trash or not.