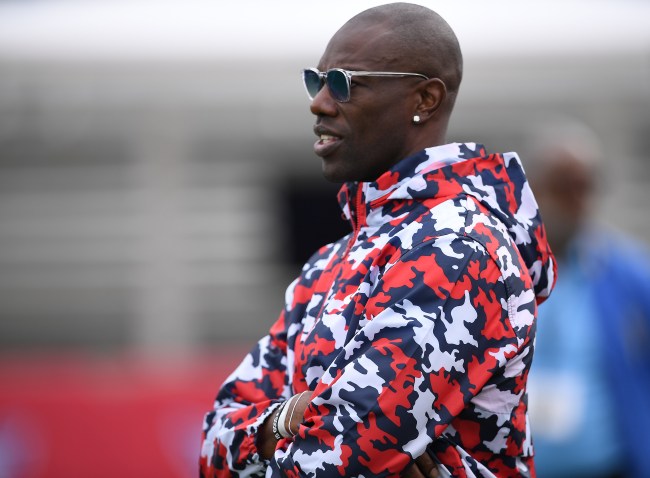 Terrell Owens knows what it’s like to be considered a malcontent. Even after his NFL playing days have ended, the outspoken wide receiver still seems to be getting punished by the league, being excluded from things like all-time lists and even Hall of Fame votes — which T.O. eventually got into, but received little support his first couple years of eligibility — all because he came across as a prima donna while playing.

Given the fact Antonio Brown has more than hurt his public image in the past year for all the wild claims he’s made or done, Terrell Owens understands that now’s the time to lend a hand to his fellow wideout. That’s why Owens visited Brown in Florida the other day to have a heart-to-heart with him about AB’s wild Instagram behavior, which involved things like yelling at the cops and throwing, uh, a bag of d*cks at his baby mama, Chelsie Kyriss.

Seeing the opportunity to help his friend, Owens revealed the context of his visit with 95.7 The Game, talking about the things he had to speak out to Brown about given some of his bizarre recent IG activity. Here’s what he had to say to “Joe, Lo & Dibs” on 95.7 The Game during a recent interview.

“No. 1, I’m a friend, first and foremost. And so, he knows. I went over there and talked to him yesterday. I’m not speaking out of pocket or out of hand.

“He knows, we spoke at great length and I didn’t, I won’t divulge everything, but I told him first and foremost I’m there for him as a friend. I’m there because I care for him. I love him as a brother, as a man.

“So, again, I didn’t appreciate some of the things that was often displayed throughout the media. And so we had a heart-to-heart. He respected that. And so, for whatever reason.

“You know, I said, I’m not gonna turn my back on an individual because the world is turning their back on him, And so, at the end of the day, like I said, I’m going to pray for him, I’m going to be there for him. And he knows I’m going to shoot it from the hip, as far as my candor…

“I’m not going to hold back. And I told him, ‘Look, man, you may not even talk to me ever again.’ That’s one of the first things I told him. I said, ‘You may block me. You may not ever want to see me again, but I came to him, first and foremost, man-to-man. And wanted to let him know, ‘Like, bro, you have kids. You have a responsibility, No. 1, as a father to your kids.’

“And so, he shouldn’t present him(self) in that light. Other than that that’s about it. I won’t go into details as far as anything else that we spoke about. But I told him, like, ‘No. 1, I’m there for him as his friend.’”

Solid move by Terrell Owens here, because, as we’ve seen over the past year, there are plenty of people who don’t want to come within 10 feet of Antonio Brown — especially given his sexual assault allegations and nonsense he’s pulled with various NFL teams this year. So, while everyone else might be writing off AB and shaking their heads about how dysfunctional things have been with him over the past 12 months, Owens is showing his loyalty to try and talk some sense into him. Hopefully it works, because Brown could use some mentoring guidance.