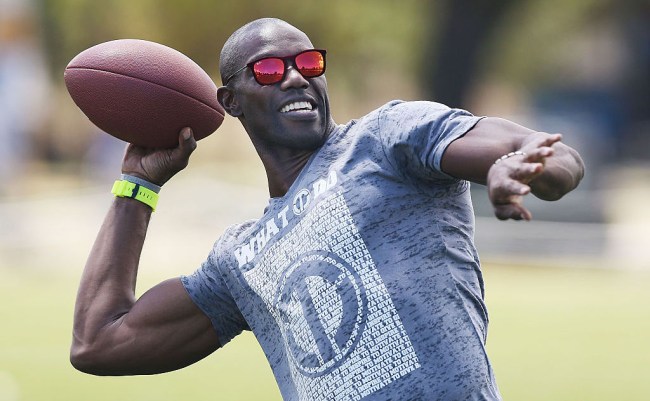 During his time in the NFL, Terrell Owens was one of the most entertaining (and most controversial) players in the league, where the wide receiver’s impressive ability to score touchdowns was only surpassed by the many celebrations that proceeded them. I don’t care how creative players have been able to get since the NFL recently relaxed their post-touchdown rules— no matter how hard you try, you’re never going to top crossing the goal line and taking out the Sharpie stashed in your sock to sign the football.

Owens was recently honored for his impressive career by being inducted into the Hall of Fame, and while he decided to big league the induction ceremony, he was more than happy to rub the honor in the face of his critics. The 44-year-old may have been retired for a while, but based on a video that just surfaced of the six-time Pro Bowler running a 4.43 40-yard dash, he’s still got plenty left in the tank.

If we’ve learned anything in the past year, it’s that the CFL will gladly sign seemingly any washed-up NFL player to come up to Canada and try to learn all of the league’s zany rules. Johnny Manziel might currently be the biggest name in the CFL despite not playing a game yet but a new report suggests Owens could be joining him in the league in the near future.

According to TSN’s David Naylor, the Edmonton Eskimos have added Owens to their “negotiation list,” which means they would have the exclusive rights to bargain with the wideout.

Hearing the @EdmontonEsks have added WR @terrellowens to their negotiation list. He is 44, hasn’t played in the NFL since 2010. #CFL #Eskimos

However, there is one minor catch according to The Canadian Football League Database, which states:

Teams place players on their neg lists on a first come, first serve basis. It is estimated 75% of players do not know they are on a CFL team’s neg list.

The Eskimos might want to think about letting him know.