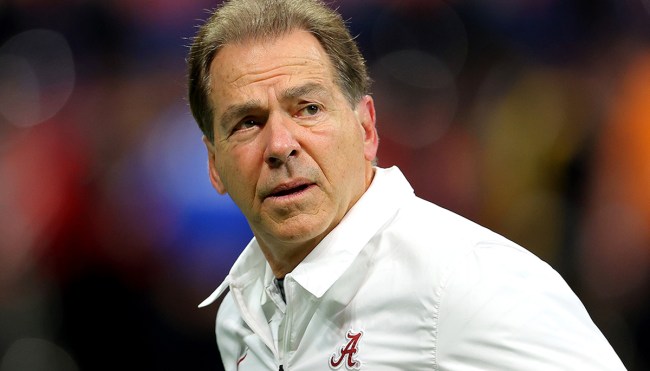 It’s safe to say name, image, and likeness deals have spawned their fair share of controversy since the NCAA shifted its longstanding stance on the issue last summer, and those de facto sponsorships have been at the center of one of the more compelling sagas we’ve been treated to over the course of the offseason courtesy of Jimbo Fisher.

It all started back in February after Jimbo Fisher took issue with the claims floated by a college football forum power user known as “Sliced Bread” after the well-connected poster said they’d heard Texas A&M had taken part in a coordinated campaign to lure in recruits with the help of NIL deals worth a collective $30 million.

Things took a very interesting turn in May after Nick Saban echoed those sentiments by accusing the Aggies of “buying” their players, which led to Fisher going scorched earth at a press conference where he once again pushed back against the allegations.

The head coach of the Crimson Tide would eventually apologize for his comments, but not before Texas A&M athletic director Ross Bjork opted to get the SEC involved by reaching out to the conference with a formal complaint concerning his lack of sportsmanship.

The organization responded by ordering Saban and Fisher to play nice after hitting both men with an entirely symbolic “public reprimand,” a development you have to imagine didn’t sit very well with at least a few people in College Station based on an email that’s now surfaced.

On Monday, On3 revealed the contents of the message Bjork sent to SEC Commissioner Greg Sankey (which was also signed by Texas A&M president Katherine Banks) on May 19th. In the email, the school voiced its “disappointment and outrage” over Saban’s comments and urged the conference to fine or suspend the Alabama coach for violating its bylaws, saying:

“We expect the league to take strong, public action against Coach Saban and the University of Alabama to demonstrate that such unprofessionalism and disrespect for Texas A&M’s student-athletes, coaches, and the university as a whole, will not be tolerated.

A public apology from Coach Saban to Coach Fisher, Aggie Football, and Texas A&M University is a good starting point, but the league should also consider monetary and participation penalties against Coach Saban.”

Alabama and Texas A&M are slated to face off on October 8th in a game where the Crimson Tide opened as a 16-point favorite, and that day cannot come soon enough.