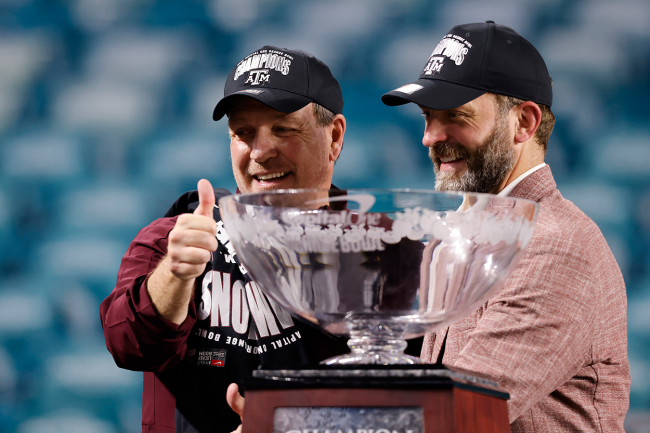 Nick Saban really ruffled some feathers in College Station last month. The head coach of Alabama made some scathing comments about NIL in a nearly seven-minute long rant and singled out multiple schools for their alleged recruiting practices.

Texas A&M was one of them and it did not go over well.

After Saban claimed that the Aggies “bought” every single one of its commits in the 2022 recruiting class, which was the highest ranked of all-time, Jimbo Fisher stood on his soapbox at a WILD impromptu press conference the next day and later got into a very sweaty altercation with a reporter.

Not long after Saban’s initial comments were made, A&M athletic director Ross Bjork went whining to the Southeastern Conference. He complained about what was said and asked for him to be punished.

Ross Bjork, if you are unfamiliar, has a history with NCAA violations.

Prior to taking over at Texas A&M, Bjork served in the same AD role at Ole Miss. He oversaw a program that was hit with an NCAA investigation and sanctions and then immediately left when he had the opportunity.

While in Oxford, Bjork cooperated with the NCAA, which is something that schools should not do. As a result, multiple athletic programs for which he oversaw were caught committing violations.

In particular, Hugh Freeze and Ole Miss football were accused of 15 (!!) Level I violations. They were forced to vacate 33 wins and were hit with a two-year bowl ban, three years of probation and multiple scholarship violations. The NCAA panel on infractions said the school lacked institutional control and fostered “an unconstrained culture of booster involvement in football recruiting.”

Although a few of the violations at Ole Miss occurred prior to Bjork’s arrival, the vast majority occurred under his nose. And now he has the audacity to try and take the “high road” at A&M.

Well, it totally backfired on him.

Texas A&M athletic director Ross Bjork has been exposed for his cowardice.

First and foremost, Bjork’s cry to the SEC did not go as he planned. In direct response to the complaint, both Saban and Fisher were issued a slap on the wrist.

Now he is being put on blast by Paul Finebaum and other coaches around the conference. On Monday, the email that Bjork sent to the SEC about Saban went public after an FOIA request.

In the email, Bjork begged for monetary and participation penalties to be imposed against Alabama. It was super lame.

And the conference as a whole reportedly tends to agree. During The Paul Finebaum Show on Monday, the well-connected host shared how others felt about Bjork around the league.

“But Ross Bjork jumping up and down trying to get Nick Saban sent to timeout comes off a little bit dubious in SEC circles. I’ve never heard of another athletic director doing that. That’s the kind of thing you go behind closed doors, you call the commissioner. But to send that in writing, it obviously blew up in Bjork’s face…”

To make matters worse, Finebaum said that Bjork completely ducked the media. Bjork rarely, if ever, turns down the opportunity to hear himself talk, and typically jumps at every and all opportunities to speak with the media.

Just not Paul Finebaum about his email to the SEC about Saban.

“…and it’s pretty obvious Bjork doesn’t want to talk about it because we invited him to come on today to discuss it,” Finebaum said on his show. “Usually, he will come on and discuss anything.”