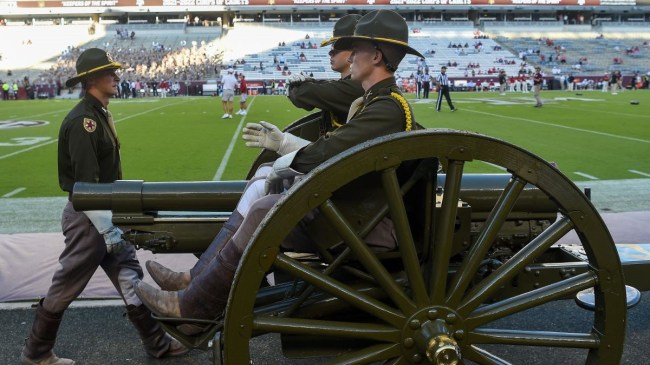 Texas A&M has had a no-good, very bad 2022 college football season. The Aggies came into the season riding high after signing an historic recruiting class in 2022. Media members were all in on A&M as well, as they began the year ranked in the top 10 in the AP Poll.

But things quickly began to unravel, and when they did, it was in a huge way. The first cracks in the armor began to show in an uninspiring Week 1 win over Sam Houston State. Things immediately got much, much worse for the Aggies in Week 2 when they lost to Appalachian State in a game they paid the Mountaineers. $1.5 million to play.

Jimbo Fisher appeared to right the ship in the following weeks. Texas A&M picked up back-to-back ranked wins over Miami and Arkansas to move to 3-1 and back into the AP Top 25.

The Aggies haven’t won since.

Texas A&M was blown out by Mississippi State in Week 5 to start a run of six consecutive losses to drop the team to 3-7. But that’s not all. Things got far worse for Fisher due to a string of off-field issues, primarily among the talented group of true freshmen.

Things have gotten so bad in College Station that some are wondering if the Aggies can even afford to pay Fisher’s buyout and still employ another head coach.

Just when you think Texas A&M had reached the bottom, the Aggies hit a new low.

The Aggies still have a pair of games left in the miserable 2022 season. One of those games came Saturday against lowly UMass. Texas A&M entered as a 32-point favorite according to Caesars Sportsbook. That’s despite the Aggies not having scored 32 points in a game all season.

Apparently, Texas A&M didn’t feel too comfortable about the game. Prior to kickoff, the Aggies took to some questionable tactics to unsettle the Minutemen.

Texas A&M has declared war and fired the first shot against the Minutemen of UMass! pic.twitter.com/8RQE0vYeiP

Prior to the game, UMass players were praying in the end zone when Texas A&M shot off an (unloaded) cannon directly in their faces.

Now, Texas A&M fires off the cannons before every game. And it’s hard to judge intent. But they couldn’t wait until the players were gone?

Can the SEC send A&M back to the big 12 please? Absolute clowns https://t.co/wAh1SsJuum

Can A&M look any worse at this point? https://t.co/O7qFJiBmwn

Not cool, Aggies. Not cool at all.