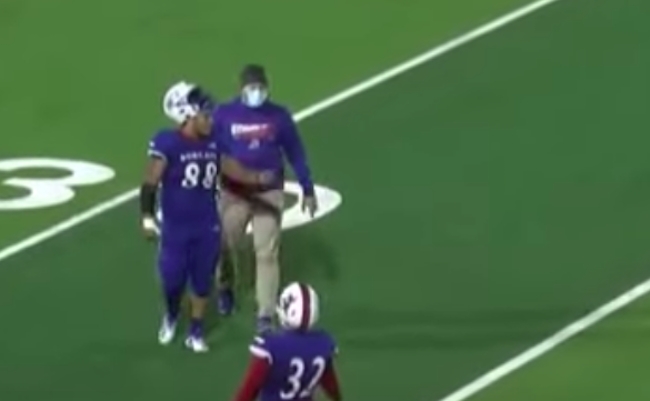 Whether you grew up in Texas or are just a big fan of Friday Night Lights, you’re likely very aware that people who live there take their high school football very seriously, as plenty of fans live and die with the successes and failures of their local team—some of which play in stadiums that hold more people than some of those you’d find on the college level—and their performance can be a major source of hometown pride.

The Lone Star State has consistently been home to some of the most talented players in the country and sends more of them to the NCAA than anywhere else in America. As a result, many are subjected to more pressure and scrutiny as a teenager than some people will ever face in their entire life, and when you consider there are also some particularly fierce rivalries that can be traced back over a century, it’s only natural that things occasionally get a little heated.

Of course, that bad blood is usually reserved for opponents but that was not the case during a game that took place on Thursday night, where Edinburg High’s Emmanuel Duron found himself ejected from the contest after roughing PSJA High’s quarterback and getting hit with a second personal foul following the play.

Duron was obviously less than thrilled with the development and decided to take his frustration out in a particularly ill-advised manner, as he sprinted from the sidelines before absolutely destroying 59-year-old referee Fred Garcia with a blindside hit (the official ended up being taken off of the field in an ambulance).

The senior linebacker was eventually restrained before being escorted off of the field by the police, and according to The Monitor, he found himself in jail on a $10,000 bond after being charged with assault on Friday morning. His teammates weren’t also immune to the repercussions of his actions, as Edinburg voluntarily eliminated itself from the playoffs in the wake of the incident—just as Duron probably eliminated the possibility of playing at any college that may have been interested in him prior to it.