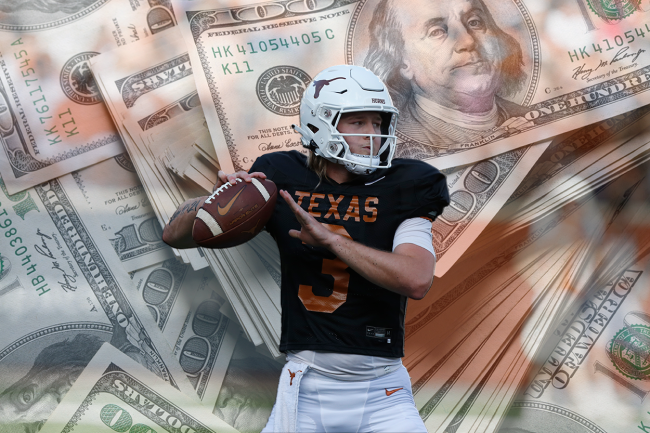 When Quinn Ewers chose to reclassify and enroll early at Ohio State in 2021, NIL opportunities played a large role. The nation’s No. 1-ranked recruit had a massive brand before he even made it to college and it has only continued to grow. His most recent deal is no exception.

Ewers, who transferred to Texas in the spring, is expected to be QB1 for the Longhorns this fall. Whether he starts or not, despite the fact that the grumpy olds are anti-mullet, he is cashing-in on his Name, Image and Likeness.

Despite the fact that he has yet to attempt a pass on the collegiate level, Ewers reportedly has deals worth at least $1.5 million. At least.

His most recent deal is one of his flashiest. Longhorns receiver Xavier Worthy recently shared a look of Ewers’ whip. The 19-year-old is driving an Aston Martin that is tricked out with all burnt orange leather. It’s fresh.

Looks like Quinn Ewers has an Aston Martin deal 👀 pic.twitter.com/XByNKzhoRs

Although the exact make and model isn’t entirely clear from Worthy’s peek, and there is no indication whether it is new or used, Aston Martin’s least expensive vehicles start at about $150,000. So, assuming that this is a custom build for Ewers, based on the interior, its value is likely sitting in the $200k+ range.

This is not the first luxury vehicle deal in Austin. Running back Bijan Robinson is driving a Lamborghini.