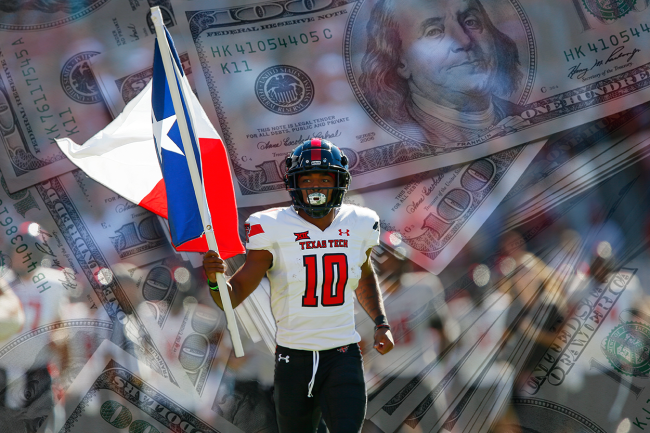 Name, Image and Likeness has changed the entire landscape of college football. Where players were not allowed to receive any compensation in any capacity before, they are now allowed to get paid for things like endorsements and appearances.

And Texas Tech players are about to cash-in.

The Matador Club is a non-profit collective organized by Red Raiders boosters. It is set to shell out $2.5 million this week.

According to the Lubbock Avalanche-Journal, the Matador Club plans to sign 100 Texas Tech football players each to one-year, $25,000 contracts. In exchange, players will participate in community service and charitable work in Lubbock and West Texas.

Cody Campbell sits on the Matador Club’s board of directors as a founding member. He told the Lubbock Avalanche-Journal that all 85 scholarship players and 15 of the top walk-ons will ink $25,000 contracts.

Payment will be made monthly to players over the next 12 months starting on the first week of August. Community service work will continue throughout the next year.

“The Matador Club has been funded by private donors,” Campbell said to the Lubbock Avalanche-Journal. “It’s an NIL collective. Donations have ranged from 10 dollars to hundreds of thousands of dollars, but we’ve gotten to a point where we’ve done pretty well and so we’re ready to sign the contracts with the football team. We plan to move forward with (men’s) basketball and baseball in the next weeks, months to come.”

He also explained why the collective decided to do things the way that they are. Contracts will be renewable annually and the money is distributed equally. The star quarterback will make as much as the 15th-ranked walk-on.

“Collectives have done things a number of different ways,” Campbell said to the Lubbock Avalanche-Journal. “You see some of them paying large amounts to individual players. You see others doing different things. But what we want to do, really, is support the entire program. This is kind of a base salary for the guys. They’re not going to be restricted from doing any other NIL stuff with anybody else. In fact, we’re going to encourage and help them to do that.

“But this is just something that’s going to make sure that guys feel supported by the Texas Tech community, that they are comfortable and in a position where they can stay in the program and develop themselves, because we really believe in what coach (Joey) McGuire and his staff are doing in terms of being focused on long-term player development. We think that’s the key to Texas Tech, in particular, having success.”

$25,000, of course, is a significant amount of money for a college student. Especially one who did not receive a dime (outside of scholarship money) before July 1, 2021.

However, while it sounds as eye-popping as it is— it also isn’t.

In today’s modern landscape of NIL in college football, $25,000 does not necessarily go very far. Five-star quarterbacks are reportedly signing for upwards of $8 million.

Alabama’s Bryce Young signed more than $1 million in deals for his NIL last fall. Texas quarterback Quinn Ewers is driving a custom Aston Martin while his running back is driving a Lamborghini. Ohio State quarterback C.J. Stroud is driving a new luxury vehicle every 45 days. FCS players are being offered six figures to transfer to FBS programs.

There is BIG MONEY involved with NIL across the country. While Texas Tech’s $25,000 is nothing to scoff at, it will not help the Red Raiders win any major recruiting battles. The sum of money is not enough.

However, if the Matador Club is paying out a base sum of $25,000 and other collectives, companies and boosters are able to step in and supplement that initial contract, then it could be a different story. And as top players are getting paid big amounts of money around the country, it’s pretty cool that Texas Tech players are being valued equally, all of the way down to the walk-ons.