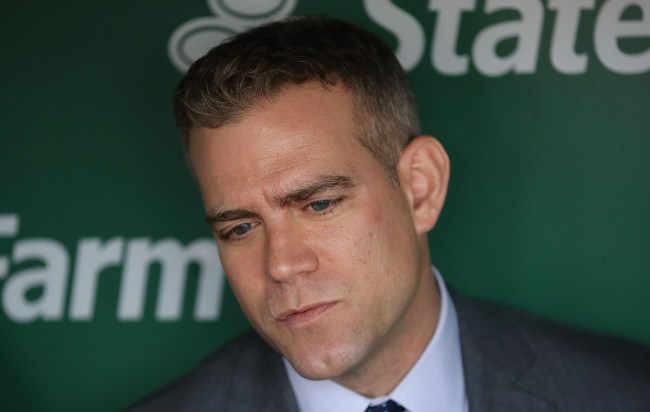 Back in March before the 2019 MLB season got started the Chicago Cubs were contenders. They went into the season at 10/1 odds to win the 2019 World Series, according to MyBookie.

The Cubs finished in third place in the NL Central behind the Brewers and Cardinals, ending the season 2-8 in their final 10 games. Suffice it to say that former Boston Red Sox hero and current Chicago Cubs President Theo Epstein has a BUSY offseason ahead of him to turn the team around before next season and get the Cubbies back in the MLB Playoffs.

Before he can do that, however, he’ll need to get this pesky lawsuit taken care of. This all began back in 2015 Spring Training when Epstein was renting an Arizona house, a house which he was forced to move out of due to a ‘scorpion infestation’. However, the couple is saying Theo’s dog pissed all over the house and the damage was so bad they’re owed $51K in repairs.

According to the Phoenix New Times, the lawsuit filed Tuesday in Maricopa County said Epstein’s dog at the Paradise Valley, Ariz., home where he and his family stayed left “a terrible odor and urine-stained carpeting.”

The owners of the house, John and Mary Valentino, also claimed in the suit that efforts to fix the problem failed because the urine “penetrated through the carpeting and pad to the slab.”

Epstein moved out of the house early because of a scorpion infestation and later was shown a repair estimate of $51,405, according to the report. (via Chicago Tribune)

To bolster their case, the couple points to a quote from Epstein in 2016 after the Cubs won the World Series. Theo was named Fortune magazine’s ‘world’s greatest leader’ and had this to say in response “I can’t even get my dog to stop peeing in the house.”

We get it, the dog pisses. But $51K+ in damages when there was also a scorpion infestation?!?!

The Cubs VP of Communications gave this statement:

“This frivolous lawsuit would have you believe a 10-pound rescue puppy transformed into a nightmarish Levitan (sic) from the 1984 Alice Cooper horror movie and went on a rampage in a rental property,” Green said, referring to the film’s Spanish title, “Leviatan.”

According to the article on the Chicago Tribune, Theo and his family found FORTY FIVE SCORPIONS on the property which “put (Epstein’s) family at risk every time they put their children to sleep” and this directly led to them moving out of the house.

The owners of the home reportedly kept the $5,000 security deposit and according to the Tribune the Epsteins never heard a word from this family until this lawsuit was filed.

I think we’ve all met some lawsuit-happy people throughout our lives. I don’t know anything about the people who filed this lawsuit but that’s where my head went when reading the details of this story.

To think that 10-pound dog caused $51K worth of damage in a house that was overrun with scorpions to the point the renters had to move out early seems a bit far-fetched but that’ll be for the courts to decide.

You can read a full rundown of the report here on the Chicago Tribune.