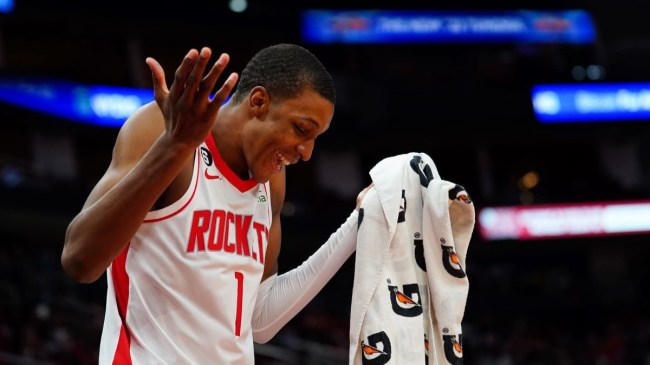 That netted them Auburn star forward Jabari Smith. The 6-foot-10-inch tall Georgia native was an All-American as a freshman, and his explosive athleticism and ability to shoot the 3 make him a potentially two-way monster in the NBA.

Houston’s future success revolves around the pairing of Smith and second-year guard Jalen Green. The Rockets drafted Green with the No. 2 pick of the 2021 NBA Draft and he was nothing short of exceptional as a rookie. While the team stunk, Green was downright electric. The 6-4 combo guard averaged 17.3 points per game to go along with 3.4 rebounds and 2.6 assists. Like Smith, he possesses elite athleticism and game-changing ability.

The duo has the potential to be one of the best in the league for a long time to come. But it seems like there’s still a lot of work to be done building their chemistry for Houston coach Stephen Silas.

The Rockets are most likely going to do a lot of losing in the coming season. All that losing can be tough on young players, especially ones who are used to immediate success. It appears that the mental toll began to set in on Monday night. Despite Houston picking up its first win of the year over the Utah Jazz, Smith and Green could be seen jawing at one another in a sideline huddle.

Jabari Smith and Jalen Green had words on the bench.

Green finished the game with 25 points, while Smith had 21 points and nine rebounds in the 114-108 victory. After the contest, it appeared the two had worked out the disagreement.

Jalen Green on Jabari Smith Jr: "He's super talented, has the gifts to be a two-way player, he's so long and can guard any position, and at the same time he can shoot the ball."

But if Houston’s rebuilding plan is going to work, it’s going to need the two budding stars to be much more cohesive.