All Hail Thomas Dimitroff, Who’s Producing A BTS TV Show Detailing What It’s Like To Be An NFL GM 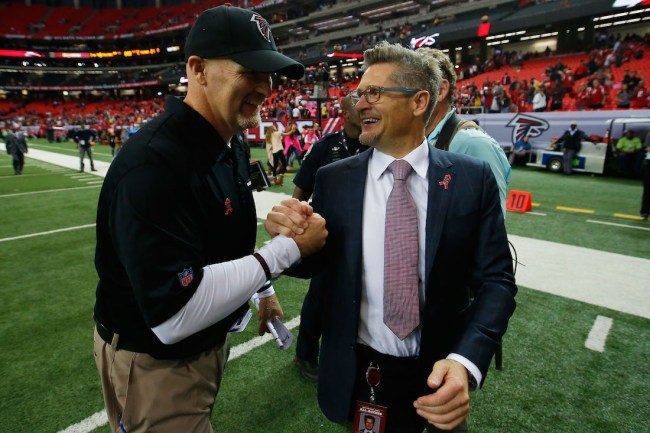 Former Atlanta Falcons general manager Thomas Dimitroff is trying to duplicate the success of Hard Knocks from each NFL season with an awesome new TV concept that shows the ins and outs of running an NFL team. After being fired by the Falcons following the 2020 season, the 54-year-old Dimitroff is turning his attention to a different kind of football entertainment, producing a behind-the-scenes show following the lives of multiple NFL GMs — and it honestly sounds pretty tight.

The news of the show came from NBC’s FMIA column, with Michael S. Holley — who was filling in for Peter King — providing a few details about the idea.

I think Thomas Dimitroff is on to something big. The former Falcons general manager has now interviewed 15 GMs for an unfiltered TV show that he’s producing. The idea is to show aspects of the job—and the personalities behind it—that often go unseen/unexplained. Among the 15: Howie Roseman, Jason Licht, Mickey Loomis, and Brett Veach.

Even if you’re not a complete football nerd, this Dimitroff concept has to be intriguing. I mean, who doesn’t want to watch how key decision-makers run an NFL front office? Instead of being tight-lipped about things like draft picks and free agents and trades and all that stuff, this show will (presumably) provide some fun entertainment into the lives of various NFL GMs.

Most of us already play video games like Madden on the regular, trying to duplicate the GM role via the Franchise mode, so this TV show will only provide a more interesting take on that intense and high-pressure lifestyle in real life. And, as Holley pointed out, it could become something big.

Sure, most of the NFL GMs being featured may remain a little quiet about certain personnel moves or draft strategies, but a lot of that may be edited out for privacy reasons anyway. Plus, the show will (presumably) be filmed after things like Training Camp and the NFL offseason, so it’s not as if each front office will giveaway too many secrets to opponents.

Becoming an NFL GM is extremely rare, with only 32 people holding the role each season. Thanks to the popularity of shows like Hard Knocks and the love for video games like Madden, Thomas Dimitroff’s new concept might just be the next great reality show — and I’m absolutely here for it.

Details still need to be worked out — like which network will air the TV show — but those will come in time. For now, every football fan should be pumped to hear about what it takes to run an NFL team. Instead of hearing rumors and reports from analysts, we’ll hear it directly from the source. That’s awesome, and most definitely an intriguing idea.