What Throwback Uniform Would You Permanently Bring Back? Here Are 5 That Shouldn’t Have Disappeared In The First Place 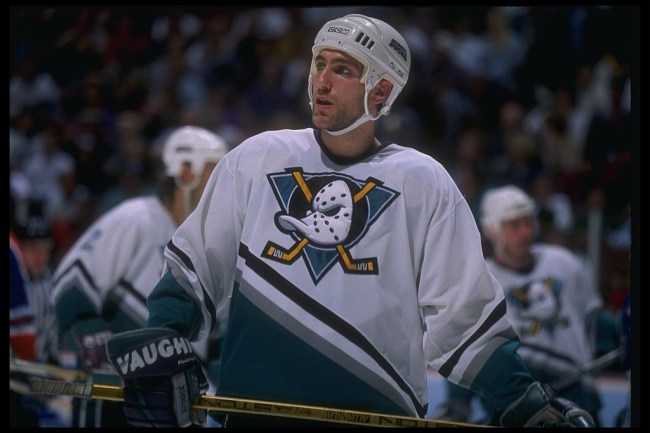 In the sportsless wasteland we’re currently living in, one of the few bright spots of newsworthiness has been NFL jersey reveals. Some have been undeniably great—like what the Chargers recently unveiled—while others *cough* Falcons *cough* have introduced new offerings that are firmly in the “meh” to “ungood” range.

We live in a time where people love nostalgia. If you post anything to social media about a semi-popular TV show from the 90s, you have to be careful your phone doesn’t explode in your hand as a result of the ensuing responses.

This is why I’m stunned that we don’t see teams more returning to looks that the general public would go wild for. Is it regressive? Yup, but everything is cyclical, and what was once old is destined to become new again. It’s why people love a throwback jersey.

There are so many franchises around the world of sports that have killer uniforms from their histories that are just sitting around unused and need to be brought out of retirement as soon as possible—but no more than the following five. 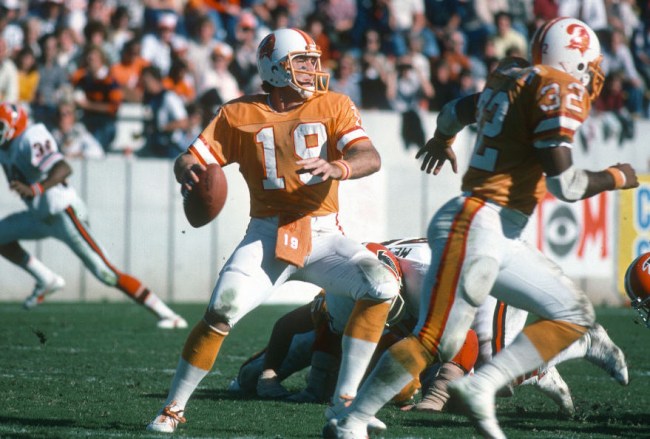 When the Bucs recently announced a new uniform was on the horizon, it was pretty clear it wasn’t going to be the fabled “Creamsicle” ensemble but rather more in line with what the team wore when Jon Gruden led them to victory in Super Bowl XXXVII.

With the offseason additions of Tom Brady and Rob Gronkowski, everyone is talking about Tampa Bay now more than ever before. If they want to keep that good press going, the best way would be to give the people what they want: the ol’ Creamsicle and Bucco Bruce combo.

While occasionally used as a throwback, the unique orange, red, and white threads were the primary look for the Bucs during their first twenty years in existence from 1976-96. There really isn’t anything else like them, and a Tom Brady #12 Creamsicle would sell like absolute hotcakes (which are apparently the gold-standard in selling things quickly). 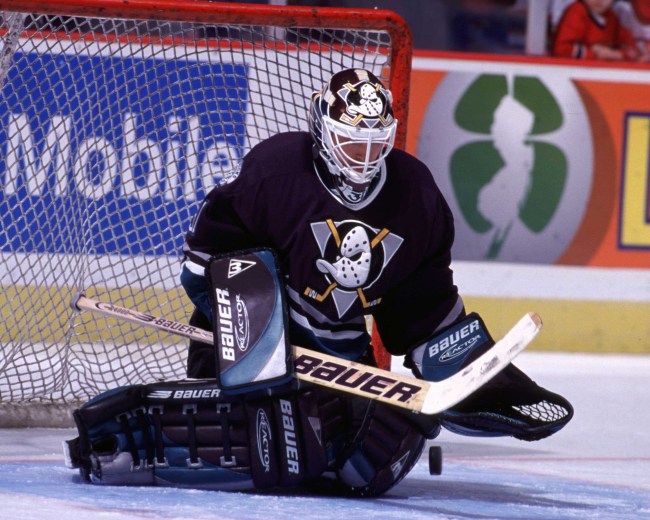 For reasons I’m unaware of, everything in the 90s was purple, teal, or some combination of the two. It was almost like a law. Whatever the reason may be, that trend bled into sports and there isn’t a team that leaned into it harder than the Mighty Ducks of Anaheim.

The Mighty Ducks could be the most ’90s team ever created, as they made their debut in 1993 after Disney decided to get into the hockey business with a franchise named after one of its movies that took to the ice sporting the decade’s requisite colors (although they referred to them as “eggplant and jade” to be fancy).

If you grew up in the ’90s, the original Mighty Ducks sweaters are like having pure, unfiltered nostalgia injected directly into your veins. They’ve got a badass logo that immediately conjures up memories of Paul Kariya, Teemu Selanne, John-Sebastian Giguere, and other relics of the era.

The Ducks switched to their current gold, orange, and black color scheme (and changed their name to simply the “Anaheim Ducks”) for the 2006-07 season and won the Stanley Cup that year. Still, fans continue to clamor for the return of the eggplant and jade MIghty Duck, a version of which made a successful return during the 2018-19 season.

I see no reason why we should stop there. 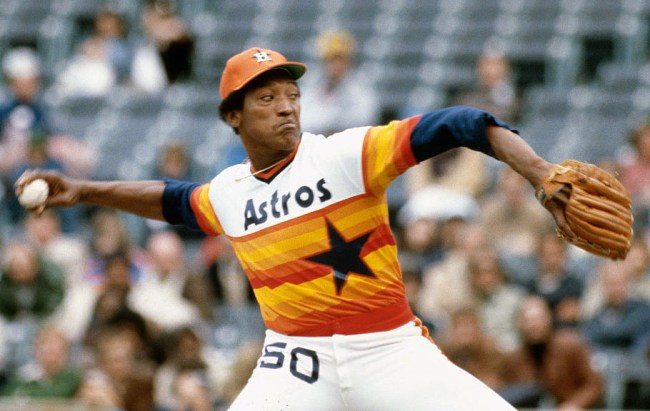 The Houston Astros are currently in the midst of a lengthy PR nightmare thanks to a cheating scandal that dominated the headlines for months after it first broke. While they may have benefitted from the delay to the start of the season in that respect, why not shift the focus away from hitting trash cans to something else when fans think of the word “Astros?”

I submit for your approval: the return of the Rainbow Jersey.

Variations of the Rainbow Jersey (subtle adjustments were occasionally made to the stripes and star) were in use from the mid-70s to the mid-80s and to this day remain some of the most polarizing uniforms ever.

You either love those things or hate them—which is precisely why they need to come back.

Unlike the other jerseys I’ve mentioned, the Astros primarily need to release this one on the unsuspecting public as a means of damage control. The news cycle would potentially have less “Did Jose Altuve have a buzzer under his jersey?” stories and more “Yay or nay on the Rainbow Jersey?” articles.

Personally, I really dig these things. They reek of the 1970s; like someone turned the set of Match Game ‘74 into a baseball jersey and I love them more than the zany antics of Charles Nelson Reilly. 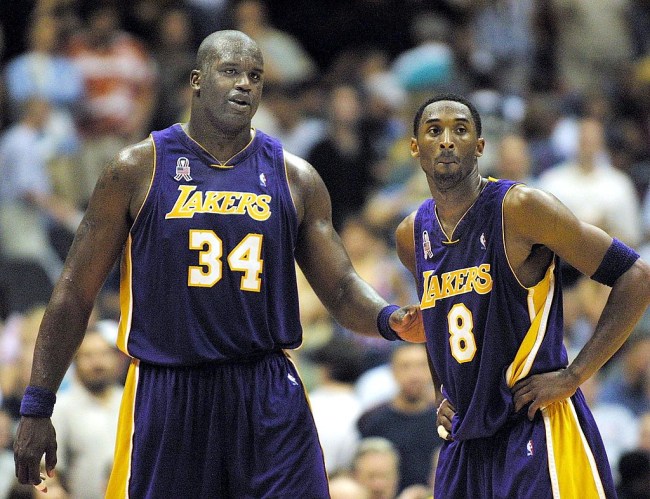 Uniforms are a great way to create a new look to coincide with a new era in a team’s history and the Lakers did exactly that when Lebron signed with the team in 2018.

While the few changes Los Angeles has made to its jerseys over the years have never been very drastic, it could certainly be argued that the Lakers are one of the few teams in sports who have such an iconic look that there’s no need to mess with it. The team kept the same design between 1978-99, which means legends like Kareem Abdul-Jabbar, Magic Johnson, Shaquille O’Neal, and Kobe Bryant all sported the exact same jersey.

There’s no need to mess with perfection. You didn’t see the Yankees retooling things at the conclusion of the Derek Jeter era. The Lakers have a storied history and it would be nice to see them fully embrace it. 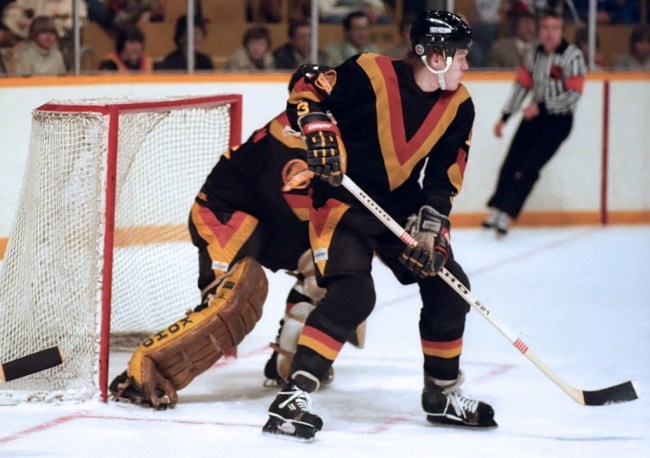 I could very well be in the minority when it comes to this one, but I really like these monstrosities that the Vancouver Canucks donned from 1978-86.

Yes, they look completely insane, but that’s what I like about them. There’s no way of mistaking that you’re watching the Canucks because they’re so unique. One major problem these days is that some teams look too similar, as there are times where you have to squint at a TV in a crowded bar to figure out if you’re watching the Leafs or the Lightning play.

The Canucks have been around for fifty years and have had more redesigns than most other teams in that stretch. Some have been better than others, and while their current set of jerseys isn’t too bad, I’d love to see the return of the Flying V.

It did return this season… for warm-ups. That’s a step in the right direction, and the Canucks did also try to embrace their somewhat unusual jersey history by wearing a version of the Pavel Bure-era “Flying Skate” jerseys this year for some select games as well.

Sadly, they’re still no Flying V no matter how hard they try.