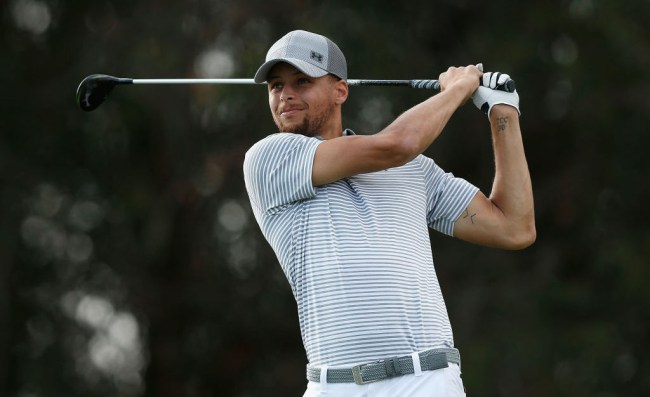 The second edition of ‘The Match‘ between Tiger Woods, Peyton Manning, Phil Mickelson and Tom Brady was a major success. It delivered in every category, which translated in its rating numbers becoming the most-watched golf event in cable history. Sure, it helped that it was the only live sporting event going on at the time, but there’s no denying that people were extremely intrigued by the charity match.

The format of having two high-profile amateurs tee it up with two of the greatest golfers ever proved to be successful and Mickelson has already made it clear that he wants to make the event an annual thing with Woods. Mickelson and Woods originally agreed to play a total of three matches, so we should, at the very least, be in store for one more go around.

This now raises the question of who should Mickelson and Woods bring in for the next edition of ‘The Match.’ While plenty of people out there make sense, two names stand out above the rest: Steph Curry and Tony Romo.

No, I don’t think a match featuring Romo and Curry would draw the same ratings as the Manning and Brady match did, but that doesn’t mean that it wouldn’t still be great. It also just feels like Romo and Curry stepping into that spotlight with Woods and Mickelson is the next move given their recent history involving the game.

Curry, a reported 0.6 handicap, knows how to get it around a golf course and has teed it up in two Korn Ferry Tour events. He may have missed the cut both times, but posting scores of 71-86-74-74 on that stage isn’t something to scoff at. Not to mention he’s one of the most popular dudes on the planet, so people would certainly tune in to watch him play, especially with Woods and Mickelson involved.

Curry is plenty entertaining with a mic in front of him and would certainly keep up with the trash-talking aspect of the event. He has history playing alongside Mickelson, too, as they teed it up together at the 2019 Safeway Open Pro-Am and had some fun on social media leading up to the round.

Romo, a reported scratch player, has played in the PGA Tour’s Corales Puntacana Resort & Club Championship twice. He missed the cut both times while breaking 80 only twice, but we’re talking about a charity match here, not teeing it up in a Tour event going head-to-head with these guys.

The former Dallas quarterback’s golf career has been well documented over the years thanks to how strong his game is and while some may say that could be a reason they shouldn’t involve Romo, we’ve never seen him play in a match like this.

With his broadcasting skills, he would be entertaining from that aspect as well.

From the gridiron to the golf course. 🏈⛳️@TonyRomo's got some game. pic.twitter.com/Ih7MA6aIZ3

There is, however, a possible negative aspect to this possible scenario and that is both Curry and Romo are too good to actually be entertaining. For the most part, Brady played horribly during ‘The Match II,’ which actually turned out to be one of the more entertaining aspects of the whole afternoon. Romo and Curry aren’t going to play that poorly, they’re not going to shank shots and chunk chips, they’re going to keep things pretty standard.

The way around it possibly being stale would be to alter the playing format. Traditional alternate shot on the back-nine would be entertaining for sure, adding a mulligan or two to the mix could also cause some drama and a one-club challenge like we saw in the recent match could keep things interesting as well.

As for an honorable mention, having a repeat of ‘The Match II’ with Brady and Manning wouldn’t be the worst idea.