Phil Mickelson Wants To Make ‘The Match’ With Tiger Woods An Annual Thing, Suggests Other Athletes That Could Be Involved 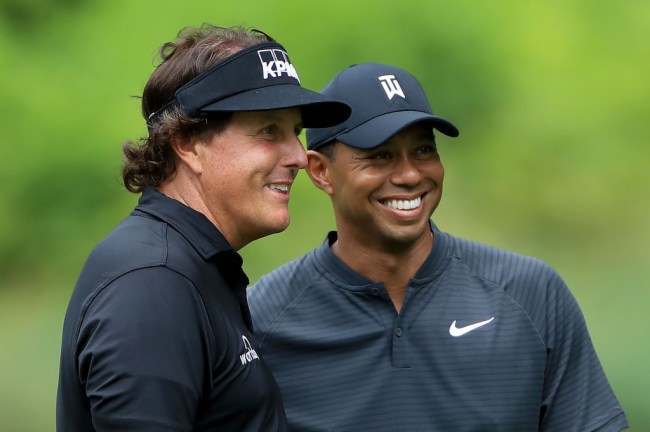 Phil Mickelson is already looking towards future editions of The Match with Tiger Woods and wants to make the event an annual thing.

It makes complete sense for Mickelson to want to make The Match a tradition. The first edition back in 2018 was successful, outside of some pay-per-view issues, and the second edition just so happened to be the most-watched golf event in cable history. It certainly didn’t hurt things that Peyton Manning and Tom Brady happened to be a part of ‘The Match II‘ but nevertheless, it’s clear that people are interested in the concept. The Match: Champions for Charity also raised $20 million for charity, we can’t forget that.

The format of the second match that showcased two huge high-profile amateur golfers worked tremendously and Mickelson wants to build off that. The 49-year-old already has a few guys in mind that would undoubtedly make the event must-watch television.

“I think you could showcase guys like Steph Curry and Michael Jordan or Tony Romo and Patrick Mahomes, who are all good golfers, elite talents, and have great personalities.” Mickelson said, according to the Los Angeles Times’ Arash Markazi. “Those personalities are going to come out with this event. Or you could have someone who loves the game and is competitive but is really entertaining like Larry David and Bill Murray. I think that could shine.”

It’s become even more apparent just how addicted to the game of golf Jordan is after ‘The Last Dance‘ documentary. If they could get Mickelson, Woods, MJ and someone like Curry to take part in a match there is a strong chance that it would trump the tv rating record that was just recently set.

While featuring two players outside the game of golf brings intrigue to an otherwise uninterested group of fans, Mickelson also suggested that he and Woods could even team up and take on two of the higher-profile younger guys on the PGA Tour, like Justin Thomas.

It’s worth noting that according to the LA Times report, Woods and Mickelson originally agreed to play a total of three matches. With Mickelson taking the first one and Woods coming out on top last weekend there’s no doubt that these guys want to go toe-to-toe at least once more, but it wouldn’t be too surprising to see this become a yearly thing.

Bryan Zuriff, who produced the first match and was the brain behind adding Manning and Brady to the mix this year, says he envisions the future events to take place the day after Thanksgiving.