‘The Match II’ May Have Changed Golf Forever 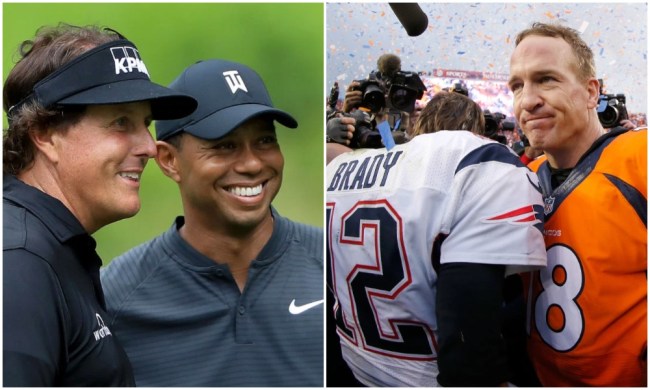 In what was reportedly the most-watched golf event in cable TV history, ‘The Match II’ between Phil Mickelson, Tiger Woods, Tom Brady, and Peyton Manning flat out delivered. Never in my wildest imagination did I think there would be a moment in my life where I would see Brady and Manning searching through bushes and branches for a golf ball. It was a moment that anybody who has ever played golf knows all too well and couldn’t help but appreciate two of the greatest quarterbacks in NFL history struggling like that. The event did more than just bring in massive TV ratings, it might have changed the world of golf forever.

We have seen it with NFL Films and in other sports where players are mic’d up and fans are able to listen and experience games like they never have before. It gives you a first-class ticket to be able to watch and listen to what guys are going through during games and in the middle of battle. Outside of it being one of the only sporting events on TV, all four players during Sunday’s match were mic’d up, which is what made this so great. Watching Mickelson try and give Brady putting tips was as good as it gets.

I believe if the world of golf and the PGA Tour learns anything from what took place on Sunday it is that they need to really consider doing the same in putting a microphone on some players. I think it will give old school and new incoming fans a whole new outlook on the game and everything that goes into it. Golf has always had the issue of bringing a younger crowd and generation to the game, and I truly believe the four GOAT’s that took on Medalist on Sunday may have just solved a glaring problem.

Related: Charles Barkley Says Players Should Be Mic’d Up If The PGA Tour Wants To Be Successful During Tournaments Without Spectators