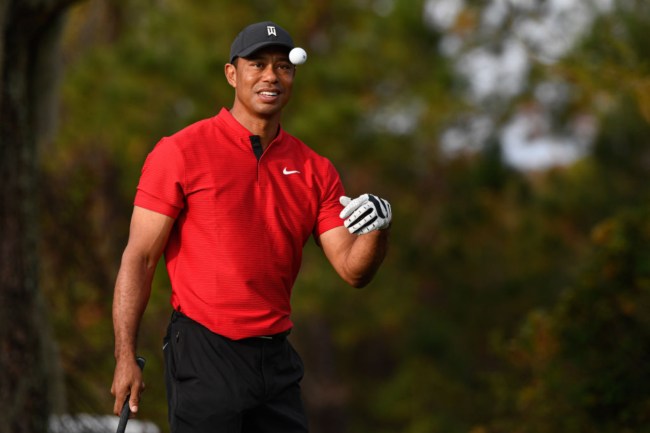 We haven’t seen or heard much from Tiger Woods over the last handful of months following his single-car crash in February, but a new video acquired by TMZ shows the 14-time major champion is walking under his own power.

The video shows Woods walking around Los Angeles on Sunday night without crutches or any sort of boot on his right leg. He’s still continuing to wear a compressive sleeve on his right leg, however, but seeing him walk without any sort of aid is a positive.

Woods is seen walking with a noticeable limp in the video. While it’s clear he’s not ready to tee it up anytime soon walking so gingerly, he’s certainly come a long way in his recovery.

🚨TMZ #VIDEO: Tiger walking in LA. Big foot style stuff again here but it’s new content. They’re reporting a “noticeable” limp but can see he is getting around. https://t.co/S2h5kzafFc pic.twitter.com/iLx0w90LdM

Woods’ right leg was the most damaged during the accident. He underwent emergency surgery after suffering comminuted open fractures to both the upper and lower portions of the tibia and fibula. Rods, screws, and pins were used to stabilize and repair injuries to the leg, foot, and ankle as well.

While we haven’t heard anything from Woods himself about a possible return to golf, those around him have offered updates in that area over the past handful of months.

Most recently, Justin Thomas shared an update on Woods during an appearance on the ‘No Laying Up’ podcast.

“I know that he’s going to try,” said Thomas. “I know how determined he is and I know he’s going to want to at least try to give something again.”

Folks on social media shared reactions to the newest video of Woods walking around:

I don’t think people realize this is a 1.5-2 year recovery. He’s doing great.

Man, looks like he has a long road ahead of him. Great to see him walking about though! #GOAT