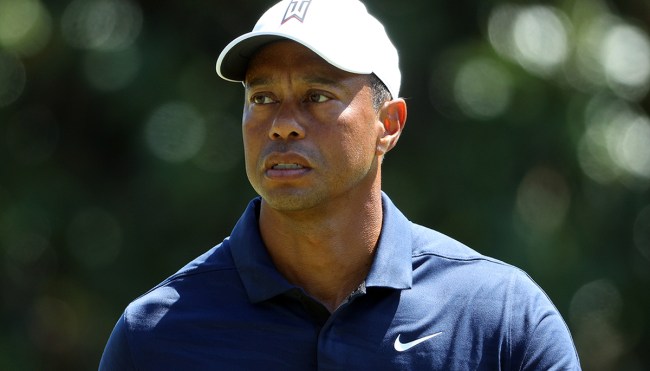 It’s been around five months since Phil Mickelson cannonballed into hot water due to some questionable comments after rumors started to swirl that he was planning to leave the PGA in favor of a Saudi-back challenger that was dangling some absolutely massive bags of cash in front of players to get them to swap allegiances.

It was only a matter of time until he confirmed he was leaving the Tour behind for LIV Golf, which has since managed to poach dozens of other players, including fairly high-profile names like Bryson DeChambeau, Dustin Johnson, and Brooks Koepka.

Those guys (as well as LIV CEO Greg Norman) have been subjected to plenty of criticism from players who’ve made the decision to stick with the PGA. None of them have been more vocal than Rory McIlroy, but many others have also voiced their concerns—including Tiger Woods.

Woods—who turned down an obscene amount of money to make the leap to the aspiring giant slayer—is currently gearing up for The British Open, and on Tuesday, he shared his thoughts on the topic with members of the media who’ve gathered at St. Andrews.

The most notable comments concerned his stance on younger players who’ve joined LIV, as he questioned whether they’re doing themselves a disservice by opting for a less competitive route.

Here’s what he had to say on that particular matter via Sports Illustrated:

“I think that what they’ve done is they’ve turned their back on what has allowed them to get to this position.

Some players have never got a chance to even experience it. They’ve gone right from the amateur ranks right into that organization and never really got a chance to play out here and what it feels like to play a Tour schedule or to play in some big events…

I can understand 54 holes is almost like a mandate when you get to the Senior Tour. The guys are little bit older and a little more banged up. But when you’re at this young age and some of these kids—they really are kids who have gone from amateur golf into that organization—72-hole tests are part of it.”

Tiger also turned his attention to Greg Norman, who (along with Mickelson) didn’t receive an invite to this year’s Celebration of Champions at The Old Course:

“Greg has done some things that I don’t think is in the best interest of our game, and we’re coming back to probably the most historic and traditional place in our sport.

I believe it’s the right thing.”

So, yeah, I think it’s safe to say Tiger’s not a big LIV Guy.