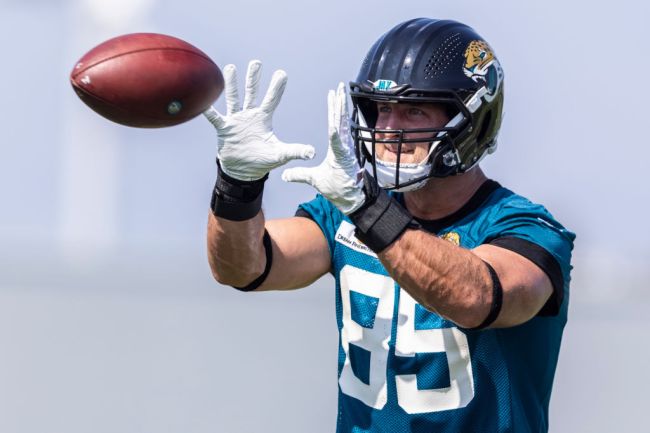 The Tim Tebow experience in Jacksonville has been nothing short of wild. Head coach Urban Meyer decided to bring his former quarterback into Jaguars training camp as a tight end and the 33-year-old showed up absolutely jacked.

Tebow jerseys began to out-sell that of Trevor Lawrence right away as he started catching touchdowns from the No. 1 overall pick. Tebow Mania took off once again.

Despite the excitement surrounding the former Heisman trophy winner, Meyer said he has only done a ‘decent’ job at his new position and the first unofficially official depth chart reflects that notion.

Per Cole Pepper of News4Jax.com, Tebow is currently in competition for the fourth tight end spot.

The depth chart lists Chris Manhertz as the starter, James O’Shaughnessy as the backup and Luke Farrell as the third-string option. Tebow is lumped into a three-person “or” group that includes Ben Ellefson and Tyler Davis at No. 4.

Meyer is planning to use a wild set of drills to determine his roster cuts and Tebow will need to at least rise to the clear-cut No. 4 option to have any chance at making the 53-man roster.

More than likely, should Tebow end up making it through camp, he will be placed on the practice squad. If that ends up being the case, he will have the opportunity to be called up on Sundays.

If that does not end up being the case, Tebow would probably be given the chance to “retire from football” instead of being cut. He will get a chance to show what he can do at tight end against live opponents on Saturday.

Jacksonville opens its preseason on Saturday against the Browns and all eyes will be on the former quarterback-turned-broadcaster-turned-outfielder-turned-tight-end.

Credit to the Jaguars, however. This entire Tebow Mania situation could have been a circus but it has been largely no matter of concern.